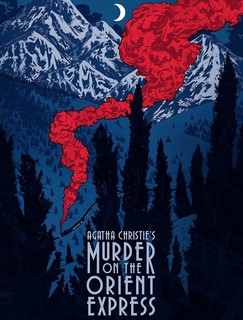 Agatha Christie: Murder on the Orient Express is a 2006 adventure game developed by AWE Productions and published by The Adventure Company for Microsoft Windows. It is the second installment in The Adventure Company's Agatha Christie series. The setting is five years before the events in Agatha Christie: And Then There Were None, with a largely unrelated storyline. The plot follows an amateur sleuth, Antoinette Marceau, and her investigation of a murder with twelve possible suspects aboard the Orient Express, which has been blocked by an avalanche in the Kingdom of Yugoslavia during 1934. She is aided by famous detective Hercule Poirot.

Murder on the Orient Express retains the main plot elements of Agatha Christie's novel of the same name. An additional ending is presented in the game which differs from the conclusion of Christie's novel. As with And Then There Were None, Christie's novel is bundled with the game. Some reviewers of Murder on the Orient Express criticized the game because of the repetitive nature of tasks the player must complete, and also complained about the inefficient and cumbersome inventory system. Others have praised it for improved graphics compared to And Then There Were None, as well as convincing voice acting and audio effects. Murder on the Orient Express is followed by Agatha Christie: Evil Under the Sun, the third installment in the Agatha Christie series.

Murder on the Orient Express is the first game in the Agatha Christie series to feature Hercule Poirot, Christie's most popular and famous detective. David Suchet, whose portrayal of Poirot achieved fame through the popular television series Agatha Christie's Poirot, was hired to provide Poirot's voice. His performance was generally met with praise. Some have criticized the game for not allowing the player to actually control Poirot; the developers explained this choice by saying that adventure gamers who make mistakes throughout the game do not reflect the genius of Poirot, but are better represented by amateur sleuth Antoinette Marceau.

The player can navigate and interact with the game's environment, mainly carriages on the Orient Express, through use of a context-sensitive cursor. The cursor changes when it is placed over an item with which the player can interact, and can be used to talk to other characters, listen to other characters' conversations, look around the environment, and move. The player can walk to a location with a single click, and run to a location with a double-click. Double-clicking on the edge of the screen instantly takes the player to the next screen. There is a map of the train in the game's interface at the top of the screen, and once each carriage has been unlocked, the player can click on any part of the map and instantly be transported to that location, saving the player from having to travel through the train screen by screen. Another accessible feature is an objectives menu interface which states the general tasks the player should be attempting to complete. This menu is designed to guide players in the right direction without giving any explicit hints.

Murder on the Orient Express, as with its predecessor, features an inventory system. There are several components of the inventory, including a fingerprint examination screen, a scrapbook, and a passport screen for managing and viewing the passengers' passports. There are a total of eighty slots for carrying items in the inventory, spread across five separate screens. Items cannot be discarded from the inventory once they have been acquired. The player can access the inventory by clicking on an icon on the game's interface, or can simply right-click. After items are used, a right-click returns them to the inventory, and the exact slot they were originally placed in. Each item is labelled, and the player can inspect each inventory item in more detail by dragging it over a magnifying glass icon, and can also listen for a soft hissing sound which indicates that there is something relevant for the player to note about a certain item. In a divergence from other games in its genre, Murder on the Orient Express does not allow the player to combine items in the main inventory screen. There is a separate interface for item combinations, and the player must drag items into this screen if they wish to try to combine them.

A large portion of gameplay in Murder on the Orient Express has the player questioning characters and listening to lengthy periods of dialogue in order to acquire clues which may lead to the murderer. Other tasks the player must complete include collecting passports and other paraphernalia left by the passengers in an effort to acquire clues to lead to the solution of the murder, and retrieving certain objects for various characters. Combining items in the inventory forms a major part of the puzzles in the game. There are no puzzles with time limits in the game, although some puzzles require correct timing. There are also several single screen puzzles, such as a safe-cracking puzzle.

A unique feature of Murder on the Orient Express is Poirot, who serves as a hint system for the duration of the game. The player can access Poirot at any time during the game, and can receive hints to help them proceed. The game has two difficulty levels, and the player can determine which one they prefer to play at soon after the murder occurs. Poirot challenges the player, allowing them to choose to either readily accept help from him and allow him to guide the player through the game, or alternatively try to outsmart the famous sleuth by solving the mystery with obscure, and in some cases nonexistent hints. If the player has trouble once they have chosen the more difficult setting, Poirot will gradually become more forthcoming with information.