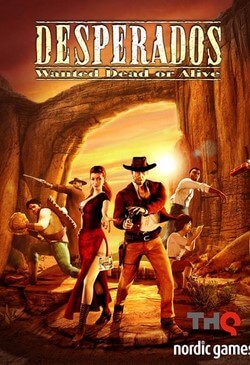 Desperados: Wanted Dead or Alive is a real-time tactics video game developed by Spellbound Entertainment and published by Infogrames for Microsoft Windows.

In the game, the player controls up to six characters in a wild west setting. The protagonist is a worldly knife-fighter and gunslinger, John Cooper. He takes on a bounty to capture a notorious train-robber named "El Diablo". As Cooper sets off on his quest, he is aided by five other friends and they work together in a real-time, stealth-based structure very similar to that introduced in Commandos: Behind Enemy Lines, although all-out gunfights are still highly possible in the game.

A sequel called Desperados 2: Cooper's Revenge was released in late March 2006. A second sequel, Helldorado, (announced as expansion pack Desperados 2: Conspiracy but made into a full game) was released in mid-2007 in Germany. The English version was released in some regions in November 2007. A fourth entry, Desperados III, is currently in development by Mimimi Productions and published by THQ Nordic. The game is set to be released for Windows, PlayStation 4 and Xbox One in 2019.

Spellbound was developing a follow-up with more multiplayer elements and steampunk-oriented, Desperados Gangs, but they shut down before they could find a publisher.

The game takes place in 1881. Many trains have been robbed the last few months by a mysterious and vicious bandit known as El Diablo. The railroad company Twinnings & Co has offered $15,000 to the one who can stop El Diablo. Bounty hunter John Cooper accepts the task, despite the objections of the bad-tempered and contemptuous US Marshal Jackson. However, he soon learns that the mission is not as simple as he thinks.

Cooper gathers a team of his old partners to aid him on his quest, consisting of African-American explosives fanatic Sam Williams; Doc McCoy, a physician, safecracker and sniper; and seductive gambler Kate O'Hara. His group successfully captures the notorious bandit leader Pablo Sanchez; but as they attempt to deliver him to the authorities, they run into (and thwart) an ambush set by El Diablo's bandits. This and Sanchez's explanations that El Diablo has an informant at Twinnings lets Cooper conclude that Smith, the company's co-director who hired him, is the snitch. Smith is assassinated before Cooper can get some answers, and chased by Jackson's posse for murder, he frees Sanchez from prison and enlists his help. Mia Yung, a young Chinese girl, also joins the team after Jackson's men kill her father at his outpost, vowing to avenge his death.

El Diablo finally turns out to be Marshal Jackson himself, who captures the group and imprisons them in his secret headquarters in a cave. They escape with the help of Mia's pet monkey, Mr. Leone. Cooper chases El Diablo up to his office and kills him in the subsequent gunfight.

The player can use a "spyglass" function on NPCs to see their fields of vision. Depending on the color of the cone, the player can see the mental state of the NPC. If the cone is green, it means the person is calm. Similarly, a yellow cone signifies suspicion, and a red means the NPC has spotted one of the characters. Some colors signify special status such as a pink cone, meaning the NPC has become attracted to Kate, or a black cone, meaning they have been hit by Mia's blowpipe.

Another special feature is the Quick Action, in which certain actions - from running to a certain place up to using a weapon against a pre-targeted enemy - can be 'pre-programmed' and called upon immediately when needed. For instance, by programming his revolver with Quick Action, Cooper can either concentrate all three shots that he can fire on a single opponent or divide them between up to three targets without having to move the mouse cursor around.