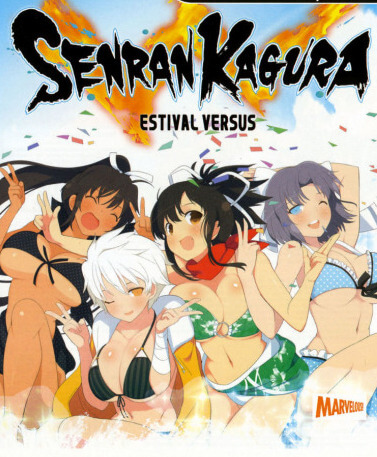 Estival Versus has two special editions, one for the PlayStation 4, and one for the PlayStation Vita. The editions are called the Nyuu Nyuu DX Pack Premium, and contained: a copy of the game; a special collectors box; a product code for Senran Kagura: Estival Versus—Eve Full of Swimsuits, a 30-minute original video animation (OVA) featuring 20 of the game's characters; a Drama CD; a soundtrack CD; and mini figurines. The only difference between the two editions are which set of figurines they contain, and what tracks are on each Drama CD. The Vita special edition contains figurines of characters from the Hebijo Clandestine Girls’ Academy, while the PlayStation 4 edition contains figurines from the Gessen Girls’ Private School. The first-print run of the collectors editions also contained a bonus 2-CD set of the game's soundtrack, and a visual book.

The game features DLC guest characters, the first of whom was the Dead or Alive/Ninja Gaiden series' Ayane. Included in this wave of DLC was Ayane's kimono along with the trademark blue kunoichi costume of Kasumi in a mash-up collab with Marvelous. In return, Dead or Alive 5 Last Round featured a costume set where the females are dressed as Senran Kagura characters and were even breakable on PlayStation 4/Xbox One versions of the game. Ayane in this set is dressed as Yagyū. Besides Ayane, three characters from Ikki Tousen, Hakufu Sonsaku, Uncho Kan'u and Housen Ryofu also appeared as the last three guest characters. Due to temporary licensing issues, the Ikki Tousen characters would temporarily not appear in Western versions until the PC port, which was released on March 17, 2017.