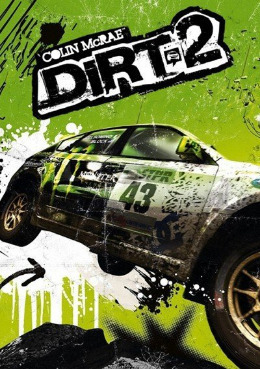 Colin McRae: Dirt 2 (or simply Dirt 2, stylised as DiRT2 or COLIN McRAE DiRT2) is a racing video game developed and published by Codemasters in 2009, first for the Nintendo DS, PlayStation 3, PlayStation Portable, Wii and Xbox 360, and then later for PC platforms (Windows, OS X). It is the seventh game in the Colin McRae Rally series and was the first game in the McRae series since McRae's death in 2007.

It features Ken Block, Travis Pastrana, Tanner Foust, Dave Mirra and Mohammed ben Sulayem. The game includes many new race-events, including stadium events. Along with the player, an RV travels from one event to another, and serves as "headquarters" for the player. It features a roster of contemporary off-road events, taking players to diverse and challenging real-world environments. The game takes place across Asia, Europe, Africa and North America. The game includes five different event types, plus three more "special" game modes. The World Tour mode sees players competing in multi-car and solo races at new locations, and also includes a new multiplayer mode. The sequel Dirt 3 was released in 2011.

Shortly before the release of the first game in the Dirt series, Colin McRae: Dirt, Colin McRae: Dirt 2 was described by Matthew Horsman, chief game designer for the game, as a game more improved and refined than its predecessor. The game was later announced officially on 19 November 2008. The engine, EGO, initially featured in Race Driver: Grid, was updated to better take advantage of the PlayStation 3 specifications, as well as improving multi-core processor utilization on the Xbox 360 and PC. The Flashback ability, allowing players to rewind time mid-race, a new feature in Grid, was kept and improved due to its popularity. In addition, the features and expanse of the multiplayer component, which was often criticized in Colin McRae: Dirt as being fairly anaemic, was completely new to the series.

Colin McRae: Dirt 2 used the audio technology Ambisonics. It was the first PC video game to use Blue Ripple Sound's Rapture3D sound engine by default. It was also one of the first video games to implement the then newly released DirectX 11 graphical standard on ATI 5000 and NVIDIA Geforce 400 series chipsets.

In February 2009, Codemasters revealed plans to release "a number of small DLC packs soon after launch which players can use to personalise and augment the boxed game". At the time of release, however, only two DLC options were available: "Trust Fund", which unlocks all vehicles, liveries and upgrades, and "Access All Areas", which unlocks all events and tracks. There have been no further DLC releases.

Colin McRae: Dirt 2 was reviewed positively by IGN, receiving a score of 8.4/10 from the U.S. site, and a slightly more favourable 9/10 from the UK site. Eurogamer gave Colin McRae: Dirt 2 a score of 8/10 with their main criticisms being reserved for the lack of weather and track deterioration, and the fact that damage now has very little influence on the game, with drivers receiving a brand new car for each race. In Japan, Famitsu gave the PlayStation 3 and Xbox 360 versions a score of one nine, one eight, and two nines, for a total of 35 out of 40.