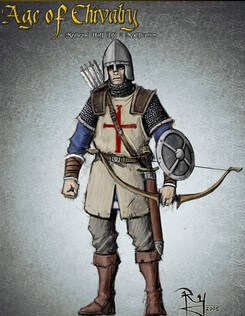 Age of Chivalry is a multiplayer-focused total conversion modification for the Valve Corporation's Half-Life 2 using the Source engine. Founded by Rickard Drakborn, Jeff Simmons and Scott Chipman, and developed by a group of independent developers called Team Chivalry, the mod features a medieval theme and aims to provide enjoyable close-combat battles.

Players select to play on either the Agatha Knights or the Mason Order, the two factions competing to rule the fictional kingdom that is the game's setting. Most maps have several objectives; completing one leads to the next until the final objective has been completed or the defending team is able to prevent the other team from completing theirs during the allotted time. Objectives vary from taking a strategical point to killing villagers, and include many siege-oriented ones like ramming down the main door of a castle and constructing bridges. Age of Chivalry plans to use a dynamic campaign, in which each scenario affects which map will be used in the next chapter.

There are two playable factions in Age of Chivalry, the Agathia Knights and the Mason Order.