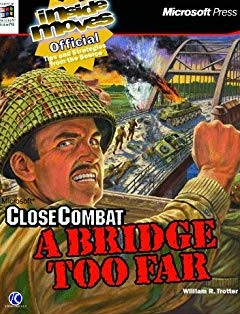 Close Combat: A Bridge Too Far, or Close Combat II, is a World War II real-time computer wargame, developed by Atomic Games, and released on September 30, 1997. The second installment of the Close Combat series, the game is played on a two-dimensional map, between two players.

Close Combat is based on Operation Market Garden; most units in the game are based on those used in 1944, with the exception of a few which are only available in custom games. The game may be played as either the Germans, or the Allies, the latter divided into the British, Americans, and Polish. The game received mainly positive reviews. On February 6, 2018, the game was re-released on GOG.com.

Combat takes place on a two-dimensional map with three-dimensional terrain elements. Depending on the map, terrain features can include a variety of features providing concealment and cover, such as hills, hedges, foxholes, trenches, streams and buildings. Units have limited fields of vision (particularly vehicles), suffer from fatigue, have limited ammunition, can be suppressed, will break and flee if their morale drops too low, and generally behave in a manner similar to real life (although there are options to make units always visible, always obey orders, and/or fearless).

The units used in the game vary, but are nonetheless divided into two categories: infantry, and support. The infantry category contains most infantry units, such as rifle infantry, scouts, snipers, MG42 machine gunners (for the German side), antitank infantry (for the Allied side), heavy assault teams, and reserves. More specialized infantry teams such as flamethrower engineers, mortar teams and machine gun teams are placed in the support category, as are vehicles (including halftracks, armored cars, tanks, tank destroyers and assault guns) and fixed guns.

Following an unofficial report on March 8, 1997, Close Combat: A Bridge Too Far was announced by publisher Microsoft and developer Atomic Games on March 11. The original Close Combat was among Microsoft's "most successful titles" by that point, according to Next Generation, and the sequel was "expected to not depart from the original to drastically". Earlier in the year, there had been speculation within the game industry that Atomic would be hired by Avalon Hill to develop Computer Squad Leader, a project ultimately delegated to Big Time Software in January 1997. Like its predecessor, A Bridge Too Far was published by Microsoft on a "title to title" basis; the company held no stake in Atomic.

In mid-March, Microsoft announced its planned computer game releases for 1997, which included A Bridge Too Far.

(0) Comments on "Close Combat 2: A Bridge Too Far Full Version"