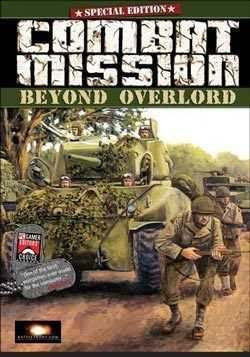 Combat Mission: Beyond Overlord is a 2000 computer wargame developed and published by Big Time Software. It is a simulation of tactical land battles in World War II, and is the first game in the Combat Mission series.

Rather than a purely turn-based system, Combat Mission uses the "WeGo" structure for handling player turns.

In January 1997, Avalon Hill contracted Big Time Software to create a computer version of the publisher's board wargame Advanced Squad Leader. Earlier collaborations between the two included Flight Commander 2 and Over the Reich. Avalon Hill had considered a computer adaptation of Squad Leader for several years, as its board incarnations had sold over 1 million copies by 1997, but the company was initially hesitant to pursue this idea because of the series' complexity. While it ultimately attempted the project with Atomic Games, this version fell through and became the unrelated Close Combat in 1996. Terry Coleman of Computer Gaming World called the decision to try again with Big Time "a breath of fresh air". Discussing the new effort in early 1997, Bill Levay of Avalon forecast a release date of late 1998 or potentially 1999 for Big Time's version, as the developer was slated to create Achtung Spitfire! and an unannounced title for Avalon beforehand. The game was set primarily to adapt Advanced Squad Leader, rather than the original Squad Leader, and Levay remarked that it would stay closer to its board roots than had Atomic's project. However, it was not planned to be a one-to-one translation of the board version. Coleman noted at the time, "The only thing for sure is that the ASL design will be turn-based".

Later in 1997, the title of Big Time Software's game was revealed as Computer Squad Leader. The developer's Charles Moylan explained that the project would automate many of the board version's numerical calculations, and would offer scaling levels of complexity to accommodate novices and veterans. Support for online and play-by-email multiplayer modes was planned. Moylan described Computer Squad Leader as an effort to merge Advanced Squad Leader with "new material" from Big Time. It began production in mid-1997. However, Moylan "suspected problems with Avalon Hill ... and acted accordingly" as the year progressed, Tom Chick of CNET Gamecenter later wrote. To safeguard his project, he avoided the inclusion of features specific to Advanced Squad Leader until the end of development; early production was focused entirely on material whose copyright was owned by Big Time, rather than Avalon Hill. As a result, the project had "maximum flexibility" in its response to changing circumstances, Moylan said.

Computer Squad Leader was canceled in July 1998 when Big Time parted ways with Avalon Hill, a decision that Moylan attributed to "boring business stuff". The following month, Hasbro purchased Avalon Hill and laid off its entire staff. Despite the shakeup, Computer Squad Leader's lack of copyrighted material allowed Big Time to continue development independently and without any delays, under the new title Combat Mission. A tentative release date was set for spring 1999. By the time of Computer Squad Leader's cancellation, Big Time had implemented the WeGo structure, and a 3D graphics engine had been created that rendered both the environments and characters as polygonal models. The inspiration for the WeGo system came from the wargame TacOps, and was an attempt to merge the strategic depth of turn-based gameplay with the intensity and realism of real-time gameplay.