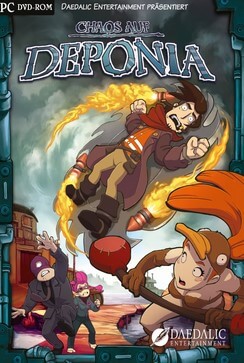 Chaos on Deponia is a 2012 point-and-click adventure game developed and published by Daedalic Entertainment. A sequel to Deponia, it continues the story of the main character Rufus as he attempts to escape from his home planet Deponia.

The core gameplay has remained unchanged from the previous installment. The player controls Rufus across various highly detailed backgrounds, collecting and combining smaller objects and interacting with machines in order to solve puzzles and advance the plot further.

Chaos on Deponia and its predecessor, Deponia, totaled 200,000 global sales by April 2013. The Deponia series overall achieved sales of 2.2 million copies by 2016, most of which derived from deep-discount sales, according to Daedalic's Carsten Fichtelmann. He noted that "full price sales were a little part of that

Reviews for Chaos on Deponia have been generally positive as it received an average of 78/100 on review aggregator website Metacritic. Critics praised the game for improvements of the pacing and writing over its predecessor, with others calling it too similar to the first game but still enjoyable.

All games from the serie "Deponia"