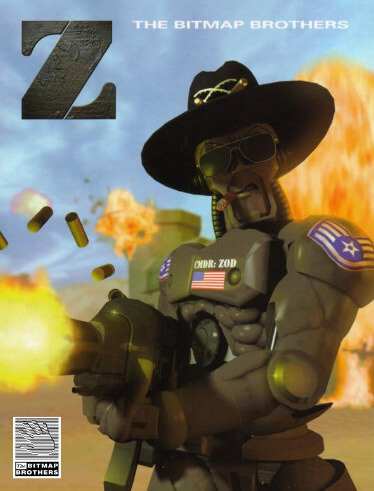 Z (pronounced "zed") is a 1996 real-time strategy computer game by The Bitmap Brothers. It is about two armies of robots (red and blue) battling to conquer different planets.

The game opens with Commander Zod shooting the Bitmap Brothers Logo off the screen. Meanwhile, a Supply Ship is adrift in space. Its occupants, two robots named Brad and Allan, wake up to the radio buzzer. The two find two new messages from Commander Zod. The first shows Zod telling about his delivery, one hour overdue; the second shows him threatening to "kick their red butts" if he finds out about them slacking off. Allan and Brad just resume their mission. The two constantly steer the ship in a bunch of twists and turns (one sends them knocking the game's title into the opening credits, which are just visible in space), and finally arriving at their first destination. Their mission sends them across twenty levels on five planets, fighting enemy soldiers. Only when the five planets are conquered will the party begin.

After the final level, Zod gets a promotion to Supreme Space Colonel. Zod and the other soldiers celebrate by drinking many cans of rocket fuel, and by the next morning, so many discarded cans litter the ground that Brad and Allan are sick. Zod gets into the Supply Ship with Brad and Allan and decides to show them how to fly the spacecraft. Zod uses the ship to pull acrobatic stunts in space, leaving Brad thrilled. When Allan pulls another can of rocket fuel from the box, he notices a "do not shake" warning on its side. He shakes it up and tosses it to Zod. When Zod opens the can, an explosion blows the ship apart. Brad and Allan are hurled off, and Zod's hat can be seen floating in deep space.

Unlike traditional real-time strategy (RTS) games, collecting resources or building specific structures is unnecessary for creating an army - the same principle that was introduced by Nether Earth, one of the RTS games ancestors. Regions and structures within their borders that actually manufacture the units are captured by moving troops to their respective flags. All you need to do is to hold acquired position for a certain amount of time while the unit is manufacturing. The more regions are under the player's control, the less the time required. More powerful units take more time to construct.

The objective of the game is to eliminate the opponent by taking out their command Fort: either by sending a unit to enter it, or by destroying it directly. Alternatively, destroying all of the opponent's units immediately wins the game.

At the start of every mission, each side is given control of their Fort and a small group of units. A host of unmanned turrets and vehicles are usually scattered about the map and sending a robot to these will allow the player to add them to their army. However, the assigned robot will remain in the captured vehicle or turret as a pilot or a gunner although he may be removed from the gun effectivley splitting him from his squad.

The game is significantly different from others of its type: For example, vehicle drivers can take damage from enemy fire, and if the driver is destroyed, the vehicle they were commandeering will be unmanned and can be captured by either side. At the time of its release, Z was also noted for being more complex, intense, and challenging compared to other games of its time, like the original Command & Conquer, where the gameplay usually boiled down to tankrushing AIs showing a lack of aggression. Further different robot types behaved differently. Units such as a sniper with a higher intelligence level are less likely to pop up from a tank because they are likely to be shot.

The game starts off with simple, symmetric levels where the CPU starts with roughly the same hardware as the player. As the game progresses, the levels become more complex, demanding more skill to control all units effectively, and the computer gains an advantage in starting units. For example, the CPU's fort usually has substantially more powerful guard turrets. The computer also gains more logistic advantages. Combat takes place on several planets, with 4 missions on each. When one is successfully captured, a space ship transports the robot army to another.