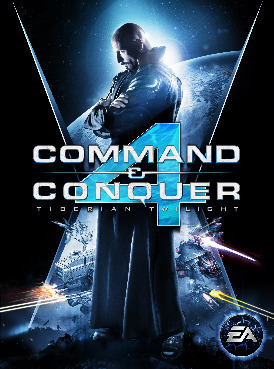 The gameplay in Command & Conquer 4 no longer follows the same resource-gathering dynamic as previous games in the series. In the main game mode, the player must capture control nodes scattered across a map, and retain more nodes than the enemy player, gaining enough points over time to win the match. Command & Conquer 4 utilizes class-based gameplay as well as some role-playing game elements.

There are two playable factions: the Global Defense Initiative (GDI) and the Brotherhood of Nod. The storyline begins with the world being consumed by the rampant growth of Tiberium, which is threatening to render the earth uninhabitable. Each faction is split into three upgradeable classes: offense, defense and support, each with their own specialized focus. The classes consist mostly of their own unique units, with the only shared unit among classes being the engineer. The offense class is focused on tank-based, front-line combat, relying less on any kind of fortified emplacements or bases. The defense class is focused on infantry-based combat as well as utilization of rudimentary base defenses, and are also the only class to have access to superweapons. It is the only class that allows the player to construct buildings in order to develop their base (analogous with the previous games). The support class is focused on air combat and specialized vehicles to traverse the environment, and is also equipped with special support powers that are used to assist teammates. As it relies on air support, the support MCVs of both factions are able to lift off in the air. Command & Conquer 4 contains two non-playable factions from previous games in the Tiberium Universe: The Scrin (C&C3) and the Forgotten (Tiberian Sun), the latter returning as a minor part of the story as well as a neutral class on the map. Command & Conquer 4 includes a total of about 90 units, including many new units and updated versions of previous Command & Conquer units.

In Command and Conquer 4: Tiberian Twilight, each faction features its own campaign with the story told and played out from their perspective, each resulting in an ultimate conclusion to the Kane saga. In addition to the two brief single player campaigns, Command & Conquer 4: Tiberian Twilight features a cooperative campaign mode, which will allow multi-class play and integrated player progression. The difficulty in co-op campaign mode varies depending on the player's level, and objectives will be shared. Campaigns for both factions take place simultaneously.

The prologue takes place in the year 2062, 15 years after the Third Tiberium War (which led to the invasion and defeat of the Scrin), and 10 years after the end of Kane's Wrath (where Kane regained possession of the Tacitus). Tiberium has evolved and is spreading at such a rate that the whole planet is expected to become uninhabitable by 2068. Humanity is on the brink of extinction.

At this time, the leader of the Brotherhood of Nod, Kane, heads directly to the headquarters of the Global Defense Initiative, in hopes of using the Tacitus and GDI's resources to construct a worldwide Tiberium Control Network. This network will allow the spread of Tiberium to be controlled and turn Tiberium into an inexpensive power source. Even though the idea of alliance has been met with hostility (which has sparked the brief Incursion War), the two factions have nevertheless united. The campaign itself starts 15 years after the formation of the alliance, as the Tiberium Control Network nears completion. The spread of Tiberium is finally stopped, bringing optimism to the world's remaining population. However, extremists from both factions start to cause unrest, which sparks the Fourth Tiberium War.

The player takes the role of Commander Parker, a GDI military officer who receives an optical implant after his battle wounds have caused him to lose his eyesight. The player is presented with the possibility to aid either Colonel Louise James's GDI extremists or Kane's Nod Loyalist forces in the Fourth Tiberium War.

The game's missions chronicle Kane's attempt to activate the Threshold 19, a tower constructed by Scrin aliens during the Third Tiberium War that functions like an interstellar portal. He claims to have used the Tacitus to help create both the Tiberium Control Network and the optical implants; these are, in fact, the keys to the activation of the tower. While the GDI and the Nod finally form an alliance, two groups of separatists desperately try to spark a war to stop (or punish) Kane. The radical Gideon leads the Nod separatists, while Colonel Louise James commands the GDI.

After the final battle for the Threshold 19, Kane is about to leave Earth using the Scrin tower. He convinces Commander Parker (the player) to activate it for him with the optical implant. The player is shot by Colonel James but nonetheless succeeds in activating the portal. In both campaigns, Kane enters the portal. (In the GDI campaign, Kane promptly thanks the player before entering it.) In the ending cut-scene, news channels announce that the Tiberium growth has receded following the complete activation of Tiberium Control Network and all the Nod followers have entered the Scrin tower and disappeared.