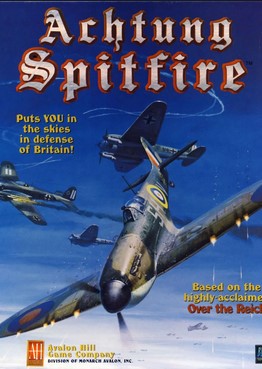 Achtung Spitfire! is a strategy computer game released by Avalon Hill in 1997. It is a turn-based air combat game taking place during the early half of World War II, including fixed-wing aircraft, air battles and operations by Luftwaffe, Royal Air Force and French Air Force in 1939–1943.

Achtung Spitfire! is a prequel to the 1996 video game Over the Reich, which takes place during the latter half of the war. Another game in the series, Third Reich PC, was also released in 1996. Rather than being designed for serious flight simulation experts, Achtung Spitfire! is catered around the interests of all World War II hobbyists.

Players must command a series of pilots as they try to achieve the goals of the current mission. Technological changes over the years of the war result in faster and better planes to fly in. After choosing the pilots, the player must either defend his own allies, combat enemy fighters/bombers or undertake an interception mission vital to the war effort. The game uses the same flight engine and graphic user interface of Over the Reich; granting the same amount of limited autonomy in every game. Players must watch their speed, torque and altitude. Otherwise, they could stall or simply crash into the ground.

Many of the flying techniques found in the actual World War II cannot be recreated in this game due to in-game limitations. Players cannot do cover fire techniques in addition to being unable to advance fire towards the enemy. The entire game stops at 1943, which is between the Battle of Britain and the Invasion of Normandy. Scenarios can be quickly generated in a method similar to Jane's Advanced Tactical Fighters.

There is a mini-encyclopedia containing vital information about 25 of the aircraft used in this game. Online gameplay is possible in multiplayer mode.

Next Generation reviewed the Macintosh version of the game, rating it three stars out of five, and stated that "Achtung Spitfire isn't breaking new ground, but it is a solid and entertaining game, and a thoughtful diversion from the usually frenetic nature of computer games."

Achtung Spitfire! was a runner-up for Computer Gaming World's 1997 "Wargame Game of the Year" award, which ultimately went to Sid Meier's Gettysburg! The editors called Spitfire! "simply the best Battle of Britain game ever."