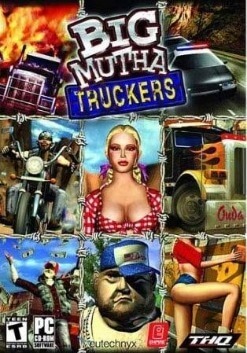 
Big Mutha Truckers is a racing video game developed by British studio Eutechnyx, released in 2002. Set in fictional Hick County, the game revolves around completing trips between cities, delivering goods, and competing in races while at the helm of an eighteen wheeler. The game is available on GameCube, Xbox, PlayStation 2, and PC. It enjoyed mediocre critical and commercial success due to repetitive gameplay, dated graphics, and lackluster sound. The game uses Steppenwolf's "Born to Be Wild" as its theme song. The sequel is Big Mutha Truckers 2. A different game of the same name was developed by Italian company Raylight Studios and released for the Game Boy Advance and Nintendo DS.

The game's plot revolves around one of four available characters and their quest to inherit the family business. With plans to retire from the family business, Ma' Jackson challenges her four children, Cletus, Earl, Rawkus, and Bobbie-Sue, to a "Trial by Truckin". She gives each sibling 60 days in which to make deliveries to various cities in Hick State County, with the company going to the sibling with the most money in the end.

Big Mutha Truckers is primarily a racing game, in the same vein as 18 Wheeler: American Pro Trucker. Players spend the majority of their time on the road, navigating the highways between the game's six cities: Salt Sea City, Capital City, Greenback, Skeeter's Creek, Smokestack Heights, and Big Mutha Truckin' Incorporated. The player will earn most of his or her money through trade, shipping goods from cell phones to beer, with additional opportunities from mini-games and challenge races.

Every city features three locations: a garage, a bar, and a store. The garage allowed players to repair damage, refuel, switch trailers to carry different kinds of cargo, buy upgrades to improve their rig, or design custom logos for their truck. In the bar the player can find tips on where to buy and sell certain cargo, and a loan shark. The store allows the player to buy and sell goods, with prices varying by town. When visiting Big Mutha Truckin' Incorporated, the bar and store are replaced by visits to Ma Jackson.

On the road, the player can earn extra money by smashing other vehicles. This money can be multiplied through combos, or by hitting a vehicle with the trailer. If the player earns a high enough combo, he can make reward icons appear on the road. When collected, these icons can refuel the truck, repair damage, or offer a cash bonus. Law enforcement and biker gangs are both present in the game, and cause trouble for the player if he or she attacks them by mistake. Any cop will pursue and capture a player, while bikers will attempt to shoot up the trailer, or even detach it from the truck. In either case, it is a significant blow to the player's cash. Every cop in this game can be avoided with skillful driving, and bikers can be shaken away from your truck.

Occasionally, the player will be asked to accomplish a side-mission when he or she visits a bar. These simple point-to-point races are good for cash if the player can complete them.

GameSpot critic Alex Navarro gave the game a 6.2 out of 10 rating, noting that while it "earnestly tries to be a fun game", flaws in the presentation and a lack of varied gameplay lead to a game that "as a full-on purchase ... just doesn't measure up." Similar complaints about the game's commerce model came from Andy Mahood of GameSpy, who wrote that "no matter how much you dress it up ... this lather-rinse-repeat cycle can turn stale after only a few hours of play."