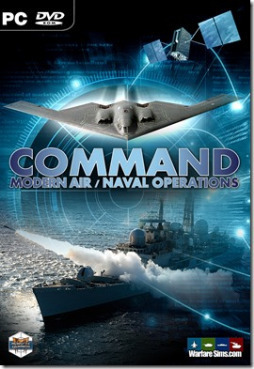 Command: Modern Air Naval Operations (CMANO), often known as simply Command, is a warfare simulation video game developed by Greek studio Warfare Sims, published by Matrix Games and released on September 24, 2013. Often described as the spiritual successor to the legacy Harpoon series, Command expands on both the scope and detail of simulation compared to Harpoon and was designed to overcome the earlier series limitations.

In CMANO, players have operational control over units. Similar to Harpoon, players can command their units using preset missions, or by giving direct instructions of the "Go here, do this" variety. The size and scale of the engagements is dependent on the scenario, with the engine capable of performing small patrol boat battles right up to global warfare. Individual scenarios vary from a few hours to multiple days of real time, although time can be accelerated to allow for quiet time between actions. No multiplayer mode is included with the game,

The game features a scenario editor that allows for real-time changes to scenarios under construction, allowing battles in the editor to be run and changed instantly.

Command received an enthusiastic reception in the hardcore wargaming genre, being praised for its combination of scope, detail, realism, accuracy and user interface functionality It has been criticized for its relatively high launch price, and a number of bugs present in its original release. However, the developers have released a number of patches and updates addressing these bugs.

Command was picked as the "Top PC Wargame of 2013" by War is Boring (together with FlashPoint Campaigns - Red Storm), and as Top Simulation of 2013 by Eurogamer.dk. It also swept the popular vote-based wargaming awards, winning the Usenet (CSIPGWH) "Wargame of the Year 2013 Gold" award  and the GrogHeads 2013 awards in the categories "Digital Wargame of the Year" and overall "Digital Game of the Year".