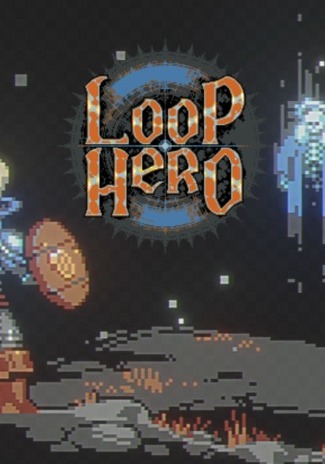 Loop Hero is a 2021 endless RPG developed by Russian studio Four Quarters and published by Devolver Digital. The game takes place in a randomly generated world where the player changes the world by placing cards instead of directly controlling a character. The game released for Microsoft Windows, MacOS, and Linux on March 4, 2021.

The game begins after the world has ended, with the introductory dialogue explaining that an evil lich obliterated reality and all of the things in it. The hero awakens in a small camp on a path and sets out to try and rebuild his world.

Along the way, he encounters other survivors who either assist him in trying to reconstruct the world or who, in despair, consider it lost and attack him in an effort to further their own survival.

Each expedition begins with the hero following a pre-generated path in an empty landscape. Slimes periodically spawn along the path which, when encountered, the hero fights and kills. As the hero kills enemies, the player receives landscape cards.

Landscape cards allow the player to place various terrain features around the hero's path, such as mountains, meadows, forests, and buildings. Each terrain feature results in a different effect such as restoring health to the player at the end of every day, increasing the player's movement speed, or periodically spawning enemies.

Placing terrain features next to each other can also modify their effect. For example, if enough mountains are placed together, they combine and provide additional health, while also spawning a new enemy type that will fight the hero.

In addition to landscape cards, killing enemies can also yield new equipment for the hero as well as resources. The player can equip items to increase the hero's attack, defense, health regeneration, and other attributes. Resources are saved in the player's inventory to be used at a later stage.

At the conclusion of each circuit around the path, the player is given the option to retreat from the expedition back to their original starting base. At the base, the player can use the resources they acquired on the path to construct new structures in their base, such as a kitchen or a blacksmith.

Most of the game takes place on one of the randomly generated paths, with the player working to upgrade the hero's equipment and strategically placing terrain elements in an effort to survive increasingly difficult enemies. If the hero kills enough enemies on the path, a final boss spawns at the path's exit point.

If the player successful defeats the boss, the story progresses. If the player is defeated while fighting enemies, they lose 70% of their resources and are forced to retreat to their base to start over from scratch.

Loop Hero received positive reviews from critics, ending up with a score of 85 on Metacritic. Critics praised the freedom to create unique worlds and the 80's aesthetic of the game. Ben Kuchera of Polygon praised the experimentation that the looping system allowed.

Ian Boudreau of PCGamesN appreciated how the deck building mechanics allowed the player to constantly vary up their playstyle. Evan Lahti, writing for PC Gamer, enjoyed the surprises that different card combinations could create, although he thought the lack of new ones hurt the later game.

Sam Machkovech of Ars Technica enjoyed the game's take on the idle genre, and how the player had to make difficult choices on their abilities.