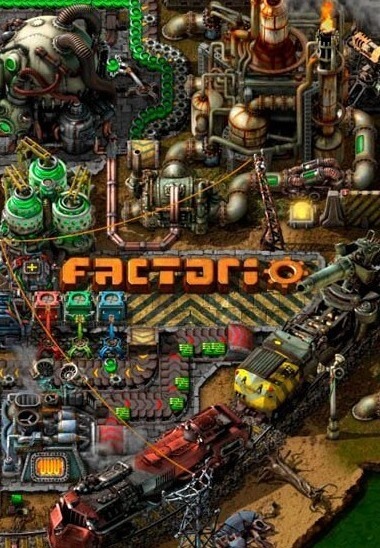 Factorio is a construction and management simulation game developed by the Czech studio Wube Software. The game was announced via an Indiegogo crowdfunding campaign in 2013 and released for Microsoft Windows, macOS, and Linux on 14 August 2020 following a four-year long early access phase.

The game follows an engineer who crash-landed on an alien planet and must harvest resources and create industry to build a rocket; however, as an open-world game, players can continue the game past the end of the storyline. The game features both single-player and multiplayer modes.

Factorio is a construction and management simulation game focused on resource-gathering with real-time strategy and survival elements and influences from the BuildCraft and IndustrialCraft mods for the video game Minecraft.

The player survives by locating and harvesting resources to craft various tools and machines, which in turn create more advanced materials that allow for the progression to more sophisticated technologies and machines.

The game progresses as the player continues to build and manage their automated factory-style system, which automates the mining, transportation, processing, and assembly of resources and products.

The game is formally "won" by launching a rocket, although choosing to ignore this goal and instead continue building a factory is possible, as Factorio is an open world game. Constructing a rocket requires a massive amount of resources, motivating the player to set up a sizable, effective factory in order to achieve this goal.

The player is concerned with defending themselves and their factory from the planet's indigenous fauna, known as 'Biters', 'Spitters', and 'Worms', who become increasingly hostile as pollutant emissions created by the player's factory increase, necessitating consideration of the balance between the player's production and the enemy's aggressiveness.

The player can utilize defensive turrets, tanks, and other weapons to eliminate enemies. As the game progresses, enemies evolve and become harder to defeat.

Multiplayer mode allows people to play together cooperatively or versus one another both locally and via the Internet. Factorio supports both dedicated servers as well as player-hosted listen servers.

In the past, the game used peer-to-peer connectivity, however this was removed as more robust options were developed. Saved world files can be seamlessly loaded in either single- or multiplayer.

By default, all players on a server share technologies, unless a system of multiple teams has been instituted by the server host. Friendly fire is present. While the hard limit for players is 65,535 due to limitations of the SOCKET protocol, this number has never been reached; the most popular servers were able to successfully handle several hundred players at once.

Players can share construction blueprints with other players on their server, via a public blueprint library.

Factorio is designed to be customisable via mods to create additional content, such as modifications to gameplay or re-texturing of visual elements. The developers offer an online portal on the Factorio website for mod developers to host their content.

To help support the modding community, there is an in-game mod manager that allows players to quickly download them. Mods are written in Lua.

The game has been developed by a team of developers from Prague, Czech Republic, since mid-2012. The development team originally consisted of a single person, but has grown larger.

Wube Software was created in September 2014 by Michal Kovařík and Tomáš Kozelek in Prague. To fund the game the development team began an Indiegogo campaign, which started on 31 January 2013 and concluded on 3 March 2013. The campaign raised €21,626 of the €17,000 goal.

Following the crowdfunding success, Wube sold early access editions of the game to raise further funds. The developer credits the April 2014 release of the game's trailer as a significant driver of those sales. As of November 2020, the team consists of 17 members.

Michal Kovařík, the game's lead designer, cited the IndustrialCraft and BuildCraft Minecraft mods for inspiration during the game's development.

The game was released on Steam as early access on 25 February 2016, but had been available to download from factorio.com since early on in development. It was officially released out of early access on 14 August 2020.