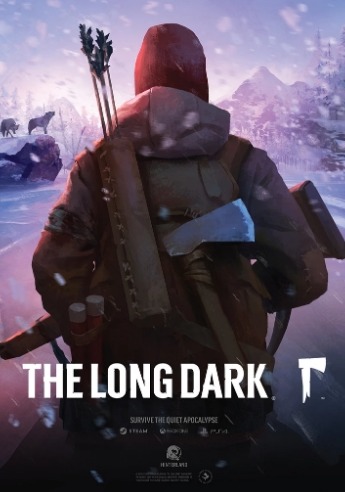 The Long Dark is a first-person survival video game developed and published by Hinterland Studio. The player assumes the role of a crash-landed bush pilot who must survive the frigid Canadian wilderness after a global disaster. The game received seed financing from the Canada Media Fund, and further funding was secured through a successful Kickstarter campaign in October 2013.

An alpha version was released through Steam Early Access in September 2014. The alpha version was later launched on the Xbox One as one of the first two launch titles associated with Microsoft's Game Preview Program in June 2015. Early reviews of the alpha release were generally positive, and the game went on to sell around 750,000 copies by April 2016. It was officially released on all aforementioned platforms on August 1, 2017, as well as for PlayStation 4. A film adaptation has been confirmed to be in the works.

The Long Dark is a survival game set in an open world environment and played from a first-person perspective. The game takes place in the frigid Canadian wilderness where the player assumes the role of a crash-landed pilot struggling to survive after a global disaster, (a geomagnetic storm). The gameplay is stated by the developers to be a "survival simulation that accounts for body temperature, caloric intake, hunger/thirst, fatigue, wind-chill, wildlife, and a host of other environmental factors." There are two game modes available to the player, "Story mode" and "Survival mode". During the game's alpha release, the player had access to Sandbox (Survival) mode, with an option to spawn in one of the six regions: "Mystery Lake", "Coastal Highway", "Pleasant Valley", "Forlorn Muskeg", "Desolation Point", and "Timberwolf Mountain", all of which are connected together through transition zones.

The objective is for the player to survive as long as possible by scavenging and utilizing whatever resources they may find within the world. This includes commodities such as food, water, firewood, medicine, and tools such as weapons, axes, knives and a host of other items.

Wildlife is also present, such as deer which can be hunted for food, and wolves and bears which are a constant threat to the player as they venture outside. All items and wildlife are randomly spawned for every new game, so no two games will be alike for the player. Tools and items degrade over time, forcing the player to make careful decisions regarding their condition and their eventual need for repair. Fire, being a primary component, is necessary for warmth and cooking. The player has to forage for wood and fuel on a regular basis to stay alive. The player can also get sick from food poisoning and disease. The Long Dark simulates a full day/night cycle which is a fundamental part of the game. The game also simulates temperature and windchill, both of which are random during every playthrough, encouraging the player to monitor the weather carefully at all times to prevent death from exposure. Initially the game did not feature varied experience modes, but due to player demand, Hinterland added three experience modes to accommodate a range of playstyles, and a fourth mode added later. The easiest mode, "Pilgrim", is for players looking for a more exploratory experience, "Voyageur" is a middle ground and the most well rounded with regard to exploration and survival, "Stalker" offers a more hardcore survival experience, and "Interloper" is for players looking for a punishing, difficult experience.

Added late in 2017, "Custom" lets the player customize many of the gameplay elements to create a unique playstyle.

The save game system enforces careful decision making by the player, saving only when the player's avatar enters a building, sleeps, passes time or receives an injury. When the player dies, this results in permadeath and the original save file is deleted, forcing the player to start a new game.

Following a period of alpha access exclusive to backers of the crowdfunding campaign, a version of the game featuring only its sandbox-style survival mode was released on Steam Early Access in September 2014. Early impressions from critics were generally favorable, but noted the incomplete nature of the game.

Leif Johnson, writing for PC Gamer in June 2014 felt that the game's small unchanging map rewarded rote memorisation whereas the game was most engaging when allowing the player to discover its systems. Andy Kelly, writing for the same publication a month later, praised the atmosphere, highlighting the art style, sound design and lighting. Kelly felt that the game's "focus on atmosphere and environmental survival" made it "stand out in an increasingly crowded genre".

At GameSpot, Shaun McInnis had similar thoughts, seeing that while the survival genre was becoming ever more crowded, The Long Dark was "one of the few games in this genre focused on capturing the solitary wonder of fighting to staying alive in the brutal wilderness". John Walker, writing at Rock, Paper, Shotgun in August 2014, enjoyed the game and found it "impressively full of things to do", but felt that the accelerated passage of time detracted from the realism. In an early access review for GameSpot in October 2014, Nick Capozzoli too criticised unrealistic systems, noting that one should not need "a dozen energy bars and a pound of venison to sustain yourself day-to-day" and that "a crowbar shouldn't lose half its integrity after being used to pry open a couple lockers". Instead of stretching his resources as a survivalist would, he felt "like an insatiable force that roves through the environment, picking it clean." Like Johnson, he criticised the limited area given to explore. With an update later that October, Hinterland doubled the size of the playable area, and expanded it again in February 2015 to bring the size of the game world to 25 km2.

Wired writer Matt Peckham labelled The Long Dark a "troubling yet beautiful gem", and joined IGN columnist Lucy O'Brien in recognizing the game's beautiful artistic vision, with O'Brien noting that "Developer Hinterland has gone to great lengths to make the world itself a beautiful place to explore". In a 2015 interview with Creative Director Raphael van Lierop about The Long Dark's launch on Xbox One, Gameranx's Holly Green addressed the unique nature of the game's survival mechanics, writing it was "one of the first pure survival games on console, separating the genre from its horror roots and taking its themes of minimalist resource management to their most logical conclusion".

Sir, You Are Being Hunted
hit
upd
new