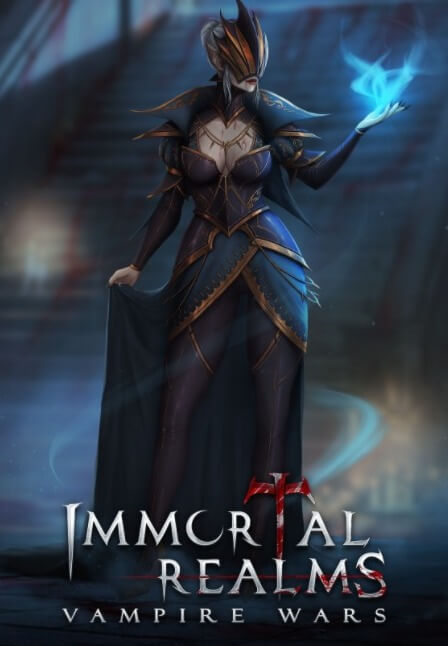 While strategy games are plentiful, fans of the genre are always looking for the next big game to sink their teeth into, and what could be more appropriate than a game that revolves around vampires and their many minions. Immortal Realms: Vampire Wars, from Kalypso Media and Palindrome Interactive, is a strategy game that feels both familiar and different, with the player controlling vampiric commanders as they gain territory on a large map, whilst taking part in turn-based battles to overcome any adversaries in their way.

Immortal Realms: Vampire Wars is set in a pretty grim world in which vampires are at the top of the food chain. There are three different factions that seek control of this world, and each of these factions are playable in the various modes. The Dracul are your more traditional vampire clan, ruling over the land of Warmont, while the Nosfernus inhabit the Land of the Dead. Then there are the mysterious Moroia clan who much prefer to keep themselves to themselves.

Each of the factions have their own lengthy story campaign for the player to play through, which will also feature other non-playable factions to wage war against as the player deals with the unique issues of their own faction. The story campaigns are unlocked in sequence, meaning that the player will have to complete the first before moving on to the second. The stories are unremarkable but easy enough to invest in and will keep the strategy fans busy for quite some time.

However, despite the solid story campaigns, it is likely that most players will spend much of their time in the sandbox mode, allowing them to choose their faction from the three available and set out to gain control of an entire map. There is also a skirmish mode for players who wish to practice commanding their armies in the turn-based combat.

As many genre veterans will expect, the gameplay is divided into the map management and the battles, which in this case are turn-based. For the management side of the game, the player will be presented with a large map divided into territories. The player will generally start off controlling a couple of these territories, and then can move their army, complete with powerful leader, to capture other territories. Each army, as the player is able to create more than one army and leader, is allowed a certain number of actions each turn, be that moving, capturing territory or whatever else they wish to do.

The main resource in Immortal Realms is blood, and the player can gather more blood by controlling territories with settlements on. Other territories may have different buildings on them, such as a variety of places to recruit new troops, or a blacksmith to make equipment, and the player will move their army around the map, taking new territories and increasing their strength, while also being very aware of enemy faction movements. Buildings can be upgraded in order to offer more benefits or stronger troops, giving the player plenty of choice in how they approach conquering the map.