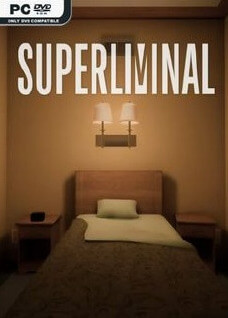 
Superliminal (previously Museum of Simulation Technology) is a 2019 puzzle video game released by Pillow Castle. The game, played from a first-person perspective, incorporates gameplay elements around optical illusions and forced perspective; notably, certain objects when picked up can be moved towards or away from the player, but when placed back down, scale to the size as the player had viewed them, enabling the player to solve puzzles to complete the game.

The game was released for Microsoft Windows in November 2019, with a PlayStation 4 version planned in April 2020.

Superliminal is a puzzle video game played from the first-person perspective. The player-character is a participant in a dream therapy program, but during the study, the character becomes trapped in a recurring dream cycle, and is guided by the voice of the study's overseer, Dr. Glenn Pierce, on how to escape from the dream.

Most puzzles involve traversing through a series of rooms to reach their exits. The exit door may be closed and require a button to be held down to open, or atop a higher platform out of reach, or may not be immediately visible. To reach the exit, the player can manipulate certain objects in the game world. The bulk of such interactions are based on the use of forced perspective: the player can pick up a waist-high cube, which is then kept at its apparent current size from the player's perspective. The player can then look elsewhere around the room, with the cube maintained at the same viewpoint, and drop that cube at that location, where the cube will scale up or downwards in size based on the new perspective. Taking the waist-high cube and looking downwards towards the floor when dropping it will make the cube shrink in size, while looking upwards towards the ceiling and dropping will make it grow large. This process can be repeated indefinitely, allowing the player to manipulate these scalable objects as to create platforms to reach the exit or clear obstacles blocking them.

Later areas of the game introduce new mechanics to this. Some objects exist as trompe-l'œil illusions with segments of two-dimensional art on various walls and surfaces, and the player must find the appropriate angle to view the object and make it appear whole to then be able to grab it.

Superliminal was developed by the six-member team of Pillow Castle, led by Albert Shih, a student from the Entertainment Technology Center (ETC) at Carnegie Mellon University. Shih had developed the foundation of the game while an undergraduate student at ETC around 2013 as part of a programming assignment, looking for "what kind of interesting first person game can I build by just moving cubes around?" He improved upon the concept during his graduate work, establishing Pillow Castle in January 2014 and obtaining assistance from four other ETC students to build out the game. Shih had been inspired by successful games like Risk of Rain and Antichamber that had been made by small team to continue his work on Superliminal. Antichamber was particular influential to Shih, as it directed and encouraged the player to think outside the box to discover the solutions to its puzzles, an idea he wanted to recapture in Superliminal. In a similar fashion, Shih likened Superliminal's scaling puzzles to the portal-based ones in Portal, designing the puzzles to create moments of epiphany for the player.

The core concept behind Superliminal is based on forced perspective, with Shih referencing the common tourist photos of people using forced perspective to appear as if they are pushing or holding up the Leaning Tower of Pisa. Achieving the scaling mechanic in the Unity engine was itself straight-forward according to Shih. When the player picks up an object, the game tracks the object's size and the distance. Then, as the player looks around, the game figures the new distance to the farthest point directly in front of the player, and scales the object's size proportional to the change from the original distance. The more difficult factor Shih had found was accounting for the complex shapes of some objects and where the player expected the center viewpoint to be at. Other puzzles in the game involving the projecting and de-projecting of 3D objects onto 2D planes used Unity's camera and projector objects with the only challenge being related to the camera depth, something that Shih said was not well-supported in Unity, but credits programmer Phil Fortier for solving. The scaling puzzles proved to have some trouble in playtesting since players could come up with possible solutions that ultimately were not working and the game unable to provide feedback for why. Instead of having players being able to jump, which the scaling made inconsistent, they instead let player mantle up ledges making it easier to guide players to a solution.

Superliminal received "generally favorable reviews" according to review aggregator Metacritic. The game's core mechanic was praised, but generally reviewers felt the game was short and lacked some of the potential that could be used with that mechanic, as well as having a lackluster story atop it.

The game was nominated for "Game, Puzzle" at the NAVGTR Awards.