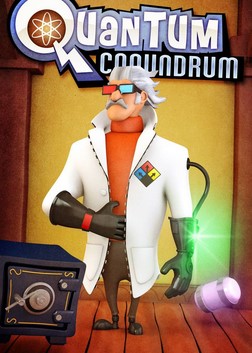 Quantum Conundrum is a puzzle-platformer video game developed by Airtight Games and published by Square Enix. It was directed by Kim Swift, who formerly worked at Valve as a lead designer on the critically acclaimed Portal. The game was released for download for Microsoft Windows on June 21, 2012, for PlayStation 3 on July 10, 2012,and for Xbox 360 on July 11, 2012.

The silent player-protagonist is the twelve-year-old nephew of the brilliant but peculiar Professor Fitz Quadwrangle (voiced by John de Lancie). He is sent to stay with Quadwrangle, who is unprepared for his arrival as he is presently working on an experiment. The experiment goes awry, causing Quadwrangle to become trapped in a pocket dimension with a loss of memory of what went wrong before, but able to watch and communicate to the protagonist. The results of the experiment leave portions of the Quadwrangle mansion in flux between four dimensions with alternate properties. Quadwrangle guides the protagonist to acquire a glove that can tame these fluxes through which he can then safely travel through the labyrinth of rooms to reach three separate power generators and restart each, which Quadwrangle believes will allow him to escape the pocket dimension. The protagonist also gains help from IKE (Interdimensional Kinetic Entity), a small alien creature that Quadwrangle had adopted as a pet during his travels. As Quadwrangle guides his nephew, he tries to recall the exact events leading to the current situation.

After starting the three generators, the house begins to shake, and Quadwrangle realizes that a fourth generator must be started. The protagonist begins to activate the device, but Quadwrangle remembers too late that restarting the device had nearly killed him before and he had escaped to the pocket dimension for safety. With the device started, the house begins to shake violently, and Quadwrangle instructs his nephew to the safety of the pocket dimension, where he will be safe, while Quadwrangle can now work out how to resolve the problems of the half-ruined mansion, which is now affecting the entire planet.

Quantum Conundrum is a puzzle-platformer viewed from the first-person perspective. As the boy protagonist, the player can run and jump, interact with various switches, and lift light objects. The player can die by falling into toxic liquids, bottomless pits, or falling from too great a height, and if hit by destructive lasers; this will restart the player at the start of a puzzle or a checkpoint if passed. The goal of each room is to reach its exit door, though it may be necessary to activate certain switches or other devices before the exit can become available.

Initially, the player does not have control of when the dimensions are shifted, but later gains access to the Interdimensional Shift Device glove where they can switch to any dimension so long as a battery for that dimension is placed in a power receptacle for that room. In some puzzles, the players must find and locate these batteries; in other cases, the player may have to choose which batteries to insert into place to solve a puzzle.