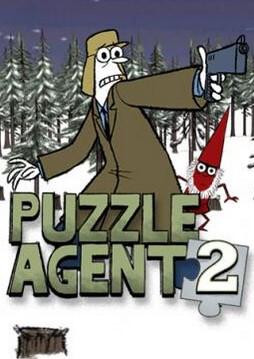 
Puzzle Agent 2 is an adventure/puzzle game by Telltale Games, in collaboration with Graham Annable. It is the sequel to Nelson Tethers: Puzzle Agent. It was released on June 30, 2011.

Like the first game, the game structure resembles a linear adventure game - the player doesn't have an inventory, but can traverse into dialog trees with other characters. Some items or choices of dialog result in puzzles to be solved, although in some cases the puzzle has no consequence in the game's progress. The types of puzzles vary from jigsaw through maths to logic puzzles. Each of them has a basic short description about the objective of the puzzle, while some have a basic set of rules and conditions that help the player deduce the solution. The player can request three hints for each puzzle, and each hint costs the player a piece of chewing gum - gum is on shortage in the town, as the hotel clerk explains, but Nelson can collect pieces of used gum he finds at each location. The puzzles don't automatically approve the players solution, even if the player provides the correct answer - Nelson must send the answer back to HQ where it is either approved or rejected. If the solution is approved, the player is given a score depending on how many hints he used and how many failed attempts he had (the latter is represented in taxpayer dollars), and an optional further explanation is provided on how the puzzle can be solved.

While on vacation, Tethers appears to be disturbed by the unresolved Scoggins case, noting that the FBI appears to be trying to cover it up. Deciding to go on an unofficial investigation, Tethers leaves his colleague and admirer Jim Ingraham to look after his files before heading back to Scoggins.

Upon arrival, Tethers attempts to check in at Valda's Inn, the local hotel, but receives some hostility from Martha Garret, the owner, who attempts to push him into leaving. Tethers eventually manages to rent out a room, but experiences a dream at night in which he is visited by an astronaut, just like his dream before he first went to Scoggins, this time leaving a note on the floor. Also like the previous dream, Tethers wakes up to find that he was dreaming, but the note on the floor is still there, reading "Isaac Davner does not exist" on one side while having a puzzle on the other side. The puzzle consists of the names of a number of unknown people, arranged into a jumbled order, prompting Tethers to find out more about the names mentioned so that he can solve it.

Outside the hotel, Tethers learns from Darryl Boutin, a resident previously seen in the Moose Ear Diner, that the names in the puzzle refer to past residents who have mysteriously disappeared into Sasimy Woods across the past several years, one of them being Darryl's brother, Darrel. Tethers travels to the local campsite, the Wallows, to meet with Alfred Versteckt, an anthropologist whose student, Will Medlock, is also mentioned in the puzzle. Alfred, who is not native to Scoggins and is therefore quickly deemed by Tethers as being "helpful", believes that the disappearances may be related to Scoggins' folklore, namely the Hidden People. Tethers next heads to the Moose Ear Diner to meet with Sheriff Bahg, and requests access to his files on the 'missing persons' cases, but Bahg, as hostile as ever, quickly denies him. However, Glori Davner, despite previously attempting to kill Tethers, offers to distract Bahg while Tethers breaks into his office if he will promise to find her husband, Isaac. Glori claims that Isaac was being "troubled" by something, and the Brotherhood of Scoggins, led by Bjorn, had offered to take him in and help him. However, they had then locked him away in the eraser factory and given him to the Hidden People, simply telling Glori that he had been "chosen" when she questioned them. As there has been no news on Isaac's whereabouts since he was stolen away into the woods after Tethers found him, Glori has become distrustful of the Brotherhood, now believing that they are behind the many disappearances.