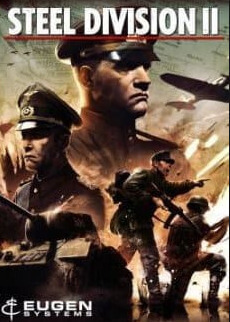 Set during Operation Bagration, Steel Division 2 is a real-time strategy video game that takes influence from World War II, similarly to its predecessor, Steel Division: Normandy 44. The game is set to include single-player, multiplayer, and cooperative aspects. The single-player is dubbed "Dynamic Strategic Campaigns" and is turn-based (unlike the previous game), with each turn being the equivalent of half a day, though combat is done in real-time. The multiplayer allows for up to twenty players in ten against ten battles. Both modes feature twenty-five maps that are scaled 1:1 with a size of up to 150 × 100 kilometres, and cover the details of the battles that took place during the aforementioned operation. Able to play as both the Red Army and Axis powers, players have the option of eighteen divisions, with the capability to choose from over six hundred units when building a deck. Decks are used during game, and only units in the deck can be deployed. Cooperative missions are also planned. Players who owned the first Steel Division game can have access to some 8 divisions (Both Axis and Allies) with over 350 units. The game is going to support mods.

In early 2018, a strike of almost half of the developers at Eugen Systems took place, ceasing work until April, with no news on the subject being released until the announcement for Steel Division 2. The pronouncement was published July 25, 2018, alongside a trailer. It was declared that Paradox Interactive would not be publishing the game, despite their involvement with Steel Division: Normandy 44. Consequently, the game will be the first by Eugen Systems to be independently published. Alexis Le Dressay, the game director and company co-founder, said they listened to fan feedback from Steel Division: Normandy 44, and made relevant improvements. An updated game engine (the IrisZoom engine), redeveloped combat mechanics, and a new art style were noted as examples.

A final release date of June 20, 2019 was announced following two prior delays.