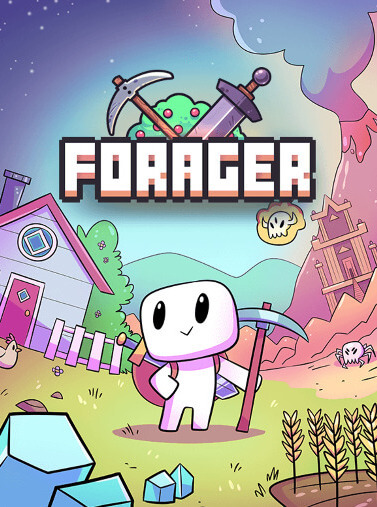 
Forager is an open-world adventure game developed by Argentinian studio HopFrog and published by Humble Bundle. The game was officially released for Microsoft Windows and Linux in April 2019, later becoming available for PlayStation 4,Nintendo Switch and Xbox One.

In Forager, the player progresses by obtaining resources that spawn throughout the world, crafting new buildings, objects, and tools, solving puzzles, and collecting money to buy new lands to explore and utilize.

Forager combines mechanics commonly seen in idle games with those of an adventure or exploration game.  With resources that respawn at a very high rate, the player will find themselves able to harvest massive amounts for crafting and leveling, eventually leading to automated systems to collect resources and produce other products and goods.

The leveling system in the game consists of a large grid of unlockable perks, which also may unlock new tools or craftable objects. Everything the player does from harvesting resources, to crafting objects, to killing enemies, has a positive impact on their XP used to advance levels.

The player is able to simulate a variety of tasks related to cooking, economics, engineering, farming, fishing, hunting, magic, manufacturing, mining, and more.

By obtaining money through crafting, skills, looting, and economic tasks, the player is able to purchase more lands to expand their base, explore new areas, and obtain new classes of resources or encounter new enemies and other NPC.

Nathan Grayson wrote a review on Kotaku calling Forager an "extremely well-made" game and called it "obviously a labor of love" while also noting that the game was "a crafting game stripped down to its very bones" and stating that players may prefer a game with "more than pure progression".

Jeff Ramos on Polygon says that the games repetitive and tedious nature serve to "make the game's bright moments all the brighter" and says that "in Forager, grinding is almost all I have to do, and I can hardly pull myself away" praising the game for its use of grind-heavy mechanics.