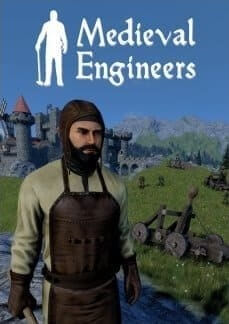 Medieval Engineers is a voxel-based sandbox video game set on an unnamed Earth-like planetoid without water that can be explored, mined, manipulated, and deformed. It is being developed and published by Czech developer Keen Software House. On February 19, 2015, Medieval Engineers was released as an early access game on the Steam platform.

The player controls a single character, the engineer, and builds structures, from small shacks to entire castles and even towns, using pre-defined building blocks. Blocks may be structural, functional, interactive, or aesthetic, and are broken down into two basic types: large and small. Large blocks such as walls, roofing and palisades determine structural integrity and may collapse under their own weight if not built carefully or if damaged in an attack. Small blocks such as timber, wheels for carts and siege equipment, furniture and crafting workstations, serve aesthetic, interactive, and/or functional roles.

The small block items, and particularly the torsion bar, rope drum, turn cross, and rope ends, are a key feature of Medieval Engineers, as they enable siege warfare. The player may combine these along with other small-block items to create battering rams, catapults, trebuchets, and siege towers, which use realistic physics based on mass, density, tension, and inertia. In a multi-player world, individual players may each claim territory, build their own castles and defenses, then create siege engines to attack other players' castles.

Players can also use tools to de-construct large blocks, fell and process trees, and reshape the landscape, leveling for building purposes or digging to mine resources and form defensive trenches and mounds. Weapons such as a club, mace, and sword can defend from hostile NPCs (barbarians) as well as other human players, and attack structures directly. Crossbows may be used to assault enemies or hunt deer (for food and hides) from a distance.

The Medieval Engineers landscape is a spheroid voxel-based planet, approximately 10 game-kilometers in radius, which is fully explorable by the player. It contains high mountain ranges with limited passable areas, deep rocky valleys, varied woodland, grassland and fields, and a network of dirt roads, which a player may use to navigate. Resources that can be collected vary depending on the nature of the terrain. Wild wheat, cabbages, and flax may be found in fields, for example, whereas mushrooms and berries exist only in wooded areas. Many aspects of the world are adjustable at the start of the game, including the day-night cycle, number of possible non-player characters (NPCs include deer and hostile barbarian attackers) and the length of time that damaged or loose objects remain in the world.

In survival mode, players are vulnerable and maintain three personal stats: Stamina, Health, and Food. Stamina determines a player's ability to sprint. It is expended through the use of some tools and weapons, and recovered by resting. Health drops when a player is attacked or injured, often by falling. At zero health they die and respawn, either randomly or at their bed if they have one, with no inventory. Their former inventory is left in a "loot bag" by their body and can be reclaimed within a limited time. Health restores slowly, which may be sped by applying a craftable bandage. At zero food, a player's health begins to drop. Food such as berries, roots and mushrooms may be collected in the wild and made more nourishing using a crafted campfire and various recipes.

A player begins knowing how to create only a very small variety of items. New items can be unlocked through the research of new skills, which generally involves collecting a certain amount of various items and using a purpose-built Research Table. Creating items in survival mode also requires various component resources, such as timbers for wooden walls, large stones for stone walls, or flax straws to create thread (which is then used to create bandages, rope, or decorative banners). The collection, transport, and maintenance of resources is a key aspect of survival mode.

In creative mode, players are invulnerable and are able to spawn unlimited resources, instantly build tools and blocks, and fly. Players can manipulate the planet surface in a nearly unlimited manner with a tool known as "Voxel Hands".

Medieval Engineers is being developed and published by the indie video game developer Keen Software House based in the Czech Republic. It is a sandbox game built on Keen's own voxel-based game engine, VRAGE 2. The volumetric approach is what allows for realistic physical behavior.

The game is a follow-up to Keen's Software House's earlier Space Engineers, which is also a sandbox game based on the VRAGE 2 engine. The core difference in gameplay is that Space Engineers is set in a zero-gravity environment, whereas Medieval Engineers, taking place on an earth-like planet, uses gravity extensively.

Medieval Engineers remains in active development, with weekly updates including an updated video posted to YouTube generally on Tuesdays.

Medieval Engineers won the 2014 Czech Game of the Year Award in the technical contribution category. As of June 2017 it has sold over 250,000 copies.