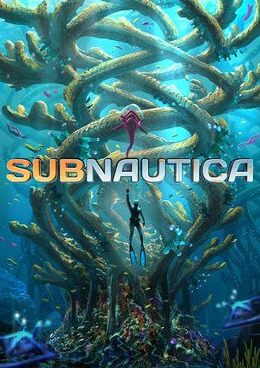 Subnautica is an open-world survival action-adventure video game developed and published by Unknown Worlds Entertainment. It allows the player to freely explore the ocean on an alien planet, known as planet 4546B, collecting unique resources to survive. They will face creatures of all kinds in a battle for survival.

Subnautica has a sequel called Subnautica: Below Zero which launched into early access on January 30, 2019.

Subnautica is a survival, adventure game set in an open world environment and played from a first-person perspective. The player controls the lone survivor of a waylaid spacecraft called the Aurora, now stranded on a remote ocean planet named simply '4546B'.

The main objective of the player is to explore the ocean and survive its dangers, while at the same time completing tasks that function to advance the plot. Subnautica allows the player to collect resources, construct tools, bases, and submersibles, and interact with the planet's wildlife.

The majority of the game is set underwater, with two explorable islands, and a simulated day-and-night cycle that affects visibility. Upon beginning a new game, players must select a difficulty mode from the following four:

"Survival", the player will have to maintain nutrition, hydration, and oxygen. If the player dies, certain items are lost from their inventory.

"Freedom mode", a mode similar in concept to Survival mode, but with hunger and thirst being disabled.

"Hardcore mode", which is the same as Survival, except that if the player dies, the player will no longer be able to respawn and the save file is permanently deleted.

"Creative Mode", in which the hunger, thirst, health, and oxygen features are all disabled, all the crafting blueprints are acquired, where no resources are needed to craft and the submersibles do not need energy and cannot be damaged.

The game officially supports VR headsets such as the HTC Vive and the Oculus Rift with the additional input of a keyboard and mouse or game controller according to the Steam sale page of the game.

Subnautica takes place in the late 22nd century, when humanity begins to colonize other star systems. A deep-space vessel constructed by the trans-gov Alterra, known as the Aurora, has been sent to a system at the outer reaches of known space on its maiden voyage. Its goals are to build a section of high-speed space travel infrastructure known as a Phasegate, and to search for a lost ship, called the Degasi, which crashed on planet 4546B ten years ago. After the Aurora enters its orbit, it is physically waylaid by a mysterious force and crash-lands on the planet. Several crew members climb into lifepods and jettison from the Aurora during the descent, one of whom is the player character. The other lifepods' inhabitants perish through various means, leaving the player as the only survivor. The player finds records of the Degasi's crew stating that two are confirmed dead and one is presumed dead.

The player also learns of the existence of the "Precursors", an alien species that came to this planet long ago to research a bacteria called the "Kharaa Bacterium.” The Precursors officially quarantined 4546B years ago due to the bacterium escaping in a research accident. The cause of the Aurora's crash was the planet's automated Quarantine Enforcement Platform, which shoots down ships that attempt to leave, land or enter orbit in order to stop the bacterium from spreading to other worlds. The Aurora crashed due to the fact that the platform mistakenly thought the ship was going to land. The player witnesses this happen when another ship, the Sunbeam, detects the Aurora's distress signal and gets shot down. When the player attempts to deactivate the installation, it fails due to the player being "infected". In order to leave the planet, the player must locate the Precursors' base deep underground to find the Sea Emperor Leviathan. It has been keeping the life in the area alive by using small creatures known as "Peepers" to distribute small amounts of a degraded form of the cure, known as “Enzyme 42.” This keeps the planet's flora and fauna alive but it is insufficient to eradicate the plague. It asks the player to help it hatch its eggs because its young produce the cure in a purer form. Once the player hatches the eggs using a hatching enzyme received from the Sea Emperor Leviathan, the player is cured of the infection. The young leave the base, curing the rest of the planet. The player is then free to disable the Quarantine Enforcement Platform and construct a rocket to leave the planet, ending the game.

Subnautica received a positive pre-release reception. Ian Birnbaum of PC Gamer described Subnautica as an "underwater Minecraft", remarking that "with an experienced developer at the helm and a limitless variety of the oceans to play with, it's going to take a lot for Subnautica to go badly wrong. As the toolbox gets deeper and the shape of the end-game gets set, Subnautica will be a unique example of the ways survival can be tense, rewarding, and fun." Marsh Davies of Rock, Paper, Shotgun praised the rewarding nature of exploring the world of Subnautica, but criticized the "arbitrariness" and lack of intuition in some of the in-game recipes.

At launch, the game received "generally positive reviews" on all platforms according to review aggregator Metacritic. Ben "Yahtzee" Croshaw on The Escapist's Zero Punctuation series gave it a generally positive review, stating, "Underwater exploration is an inherently appealing concept: this whole new world rolling away before you, made all the more beautiful by its utter hostility." He did criticize that it was "a little unintuitive and not a little buggy". However, he would later go on to list it as his 2nd favourite game of 2018 in his year-end video.