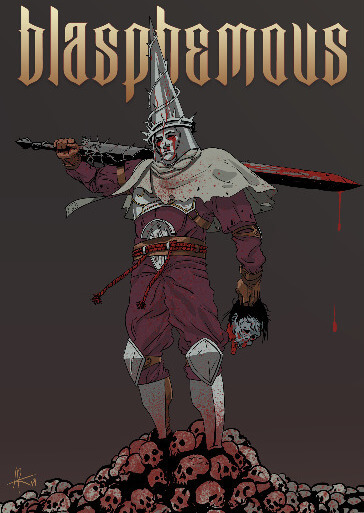 
Blasphemous is a Metroidvania video game developed by Spanish studio The Game Kitchen and published by Team17. The game was released for Nintendo Switch, PC, PlayStation 4 and Xbox One on 10 September 2019.

It began as a Kickstarter campaign in 2017.

A foul curse has fallen upon the land of Cvstodia and all its inhabitants – it is known simply as "The Miracle". The game is set in a land of religion and superstition, with multiple influences from Christianity.

The protagonist of the game is The Penitent One – a sole survivor of the massacre of the "Silent Sorrow". He wears a mask and helmet that consists of a crown of thorns and a capirote. The Penitent One wields a sword that has simple slashing attacks, and can also dodge and parry attacks. Certain special abilities can be acquired throughout the game that aid the player in navigating the map in addition to fighting enemies. While the player has a short healthbar, recovery items are available in the form of "Biliary Flasks", which can be refilled when the player visits certain checkpoints in the game. Progress is also saved, with the player reviving at these checkpoints when their healthbar is emptied. When visiting these checkpoints, the player's health is completely refilled, but all enemies previously slain, excluding bosses, will repopulate in the game.

The game won the awards for "Best Spanish Development" and "Indie Game of the Year" at the 2019 Titanium Awards, where it was also nominated for "Best Art".