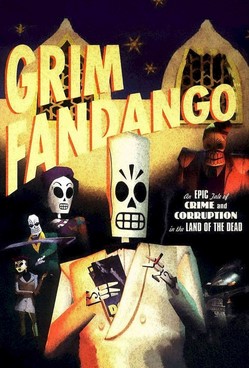 
Grim Fandango is an adventure game, directed by Tim Schafer, developed and published by LucasArts in 1998 for Windows. It is the first adventure game by LucasArts to use 3D computer graphics overlaid on pre-rendered static backgrounds. As with other LucasArts adventure games, the player must converse with characters and examine, collect, and use objects to solve puzzles.

Grim Fandango is set in the Land of the Dead, through which recently departed souls, represented as calaca-like figures, travel before they reach their final destination. The story follows travel agent Manuel "Manny" Calavera as he attempts to save new arrival Mercedes "Meche" Colomar, a virtuous soul, on her journey. The game combines elements of the Aztec belief of afterlife with film noir style, with influences including The Maltese Falcon, On the Waterfront and Casablanca.

Grim Fandango received praise for its art design and direction. It was selected for several awards and is often listed as one of the greatest video games of all time. However, it was a commercial failure and contributed towards LucasArts' decision to end adventure game development and the decline of the adventure game genre.

In 2014, with help from Sony, Schafer's studio Double Fine Productions acquired the Grim Fandango license following Disney's acquisition and closure of LucasArts the previous year. On January 27, 2015, Double Fine released a remastered version of the game, featuring improved character graphics, controls (including point and click), an orchestrated score, and directors' commentary. It was initially released for Windows, PlayStation 4, PlayStation Vita, OS X, and Linux platforms. Mobile versions for Android and iOS devices were released on May 5, 2015. A Nintendo Switch port of the remastered version was also released on November 1, 2018.

Grim Fandango is an adventure game, in which the player controls Manuel "Manny" Calavera (calavera being Spanish for 'skull') as he follows Mercedes "Meche" Colomar in the Underworld. The game uses the GrimE engine, pre-rendering static backgrounds from 3D models, while the main objects and characters are animated in 3D. Additionally, cutscenes in the game have also been pre-rendered in 3D. The player controls Manny's movements and actions with a keyboard, a joystick, or a gamepad. Manny must collect objects that can be used with either other collectible objects, parts of the scenery, or with other people in the Land of the Dead in order to solve puzzles and progress in the game. The game lacks any type of HUD. Unlike the earlier 2D LucasArts games, the player is informed of objects or persons of interest not by text floating on the screen when the player passes a cursor over them, but instead by the fact that Manny will turn his head towards that object or person as he walks by. The player reviews the inventory of items that Manny has collected by watching him pull each item in and out of his coat jacket. Manny can engage in dialogue with other characters through conversation trees to gain hints of what needs to be done to solve the puzzles or to progress the plot. As in most LucasArts adventure games, the player can never die or otherwise get into a no-win situation (that prevents completion of the game).

The souls in the Land of the Dead appear as skeletal calaca figures. Alongside them are demons that have been summoned to help with the more mundane tasks of day-to-day life, such as vehicle maintenance. The souls themselves can suffer death-within-death by being "sprouted", the result of being shot with "sproutella"-filled darts that cause flowers to grow out through the bones. Many of the characters are Mexican and occasional Spanish words are interspersed into the English dialog, resulting in Spanglish. Many of the characters smoke, following a film noir tradition; the manual asks players to consider that every smoker in the game is dead.