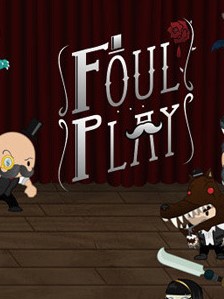 
Foul Play is a 2013 brawler action-adventure developed by UK-based indie studio Mediatonic and published by Devolver Digital. It first released for Microsoft Windows and Xbox 360 on 18 September 2013. The game was later patched with a build for OS X and Linux on 29 October 2013. After a port to PlayStation 4 and PlayStation Vita was announced in mid-2014, the PlayStation 4 received its version of the game on 1 September 2015 in North America as part of the PlayStation Heroes charity campaign.

In Foul Play the player follows the daemon-hunter Baron Dashforth and his sidekick Scampwick, performing on-stage in a theater where something has gone wrong and he must discover the origin of the foul play.

Foul Play is a side-scrolling co-op brawler set on-stage in a theatre in front of the theater's crowd. The player may perform shattering takedowns and reversals to amuse the audience and perform devastating linked attacks.

Foul Play was released to mixed reviews. IGN gave it 8.1/10, stating that it "stages one of the most imaginative brawlers around, with bonus points for style in more ways than one." GameSpot gave the Xbox 360 version 6/10, praising its art style and plot, but criticizing the repetitive nature of the game. Gaming Nexus rated the game 9.0/10, praising its sense of humour and art style.