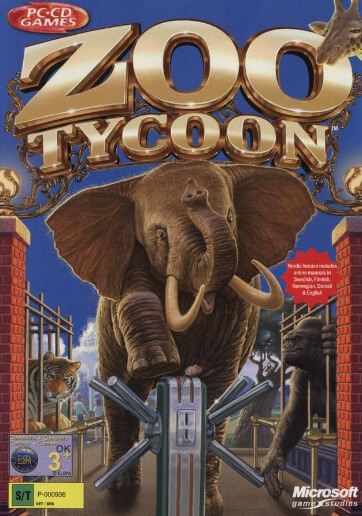 Zoo Tycoon is a business simulation developed by Blue Fang Games and released by Microsoft. It is a tycoon game in which the player must run a zoo and try to make a profit. Although first released for Microsoft Windows and Macintosh in 2001, it was ported to the Nintendo DS in 2005. It was followed by two expansion packs, Dinosaur Digs and Marine Mania, which were released in 2002, as well as a sequel, Zoo Tycoon 2, released in 2004.

The goal of Zoo Tycoon is to create a thriving zoo by building exhibits to accommodate animals and keeping the guests and animals happy. Exhibit-building is one of the primary goals of Zoo Tycoon. To keep the guests and animals happy, exhibits should be suitable to the animal; for example, a lion is best suited to a savannah environment. Choices in terrain, foliage, rocks, shelters, fences, toys and the presence of zookeepers all contribute to the suitability of an exhibit and the happiness of the animal. Guest happiness is dependent on animal choice, animal happiness, buildings, and scenery. Buildings may include bathrooms, restaurants and food stands, shops, reptile houses, aviaries, or entertainment buildings such as movie theaters. Scenery involves aesthetics that raise guest happiness slightly, such as topiary art, light posts, or benches. Keeping both animal and guest happiness allows the player to gain monetary awards and steady income. To help manage the expanding zoo, players can employ maintenance workers, zookeepers and tour guides. If the animals are released and escape from their enclosures, they can kill the guests. Sometimes, when animals are unhappy, they can attack the zookeeper.

There are three modes in Zoo Tycoon: Tutorial, Scenario, and Freeform. Tutorial teaches the player how to build exhibits and keep guests happy. Scenario mode has the player complete a series of objectives under restrictions. These objectives may include achieving a certain guest and animal happiness, achieving a certain exhibit suitability, displaying a certain number of animals, or breeding a certain animal. Freeform allows the player to choose the amount of money and the map with which they start. They are presented with an open lot and a limited selection of animals, buildings, and scenery available for purchase. As the game progresses, more animals and items become playable. Additional animals and items may be researched, where money is invested to make them playable.

Cheat codes are available for the game and many of them reference characters from Reservoir Dogs.

Zoo Tycoon was created in the wake of the success of the 1999 Hasbro Interactive game RollerCoaster Tycoon, which sold well for many years. Zoo Tycoon did well enough for Microsoft and Blue Fang Games to release two expansion packs: Dinosaur Digs, which added prehistoric-themed items and animals including mythical creatures, and Marine Mania, which allowed aquatic-themed items and animals. Eventually, Microsoft bundled the expansion packs with Zoo Tycoon to create Zoo Tycoon Complete Collection as Hasbro had done for RollerCoaster Tycoon. This had the functionality of both expansion packs and bonus content.

The success of Zoo Tycoon also led to the creation of new features by fans of the game. Mods were created to fix problems with the game and unlock new features. Many of these mods were made possible by an official program created by Blue Fang Games named Animal Project Editor (APE), which allows the player to easily create one's own animals or objects, with either simply renaming a premade item or creating frames one-by-one for something new.

Zoo Tycoon was received with mixed to positive reviews, gaining an average 68 out of 100 at Metacritic. GameZone gave the game a score of 8 out of 10.

Zoo Tycoon was a commercial success. Within a year of release, the game rose above 1 million copies in sales. By October 2003, its global sales had surpassed 2.5 million copies, or 3 million when grouped with its expansion packs. The NPD Group declared it the eighth-best-selling computer game of 2002, and the 11th-best-selling of 2003. NPD proceeded to rank the game's Zoo Tycoon: Complete Collection bundle 10th for 2004, 16th for 2005 and 12th for 2006.

In the United States alone, Zoo Tycoon sold 1.1 million units and earned $28.2 million by August 2006. It was among the country's 15 highest-selling computer games ever by July 2004, and Edge ranked it as the country's fifth-best-selling computer game released between January 2000 and August 2006. Zoo Tycoon also received a "Gold" sales award from the Entertainment and Leisure Software Publishers Association (ELSPA), indicating sales of at least 200,000 copies in the United Kingdom; and a "Gold" certification from the Verband der Unterhaltungssoftware Deutschland (VUD), for sales of at least 100,000 units across Germany, Switzerland and Austria.

The Zoo Tycoon series, including the original Zoo Tycoon, surpassed 4 million copies in global sales by July 2004. Over 2 million copies of the series were sold in the United States alone by that date. Series sales in the country rose to 2.9 million units by August 2006.