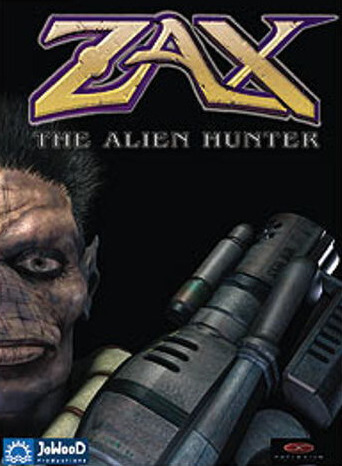 Zax: The Alien Hunter is an isometric shooter video game developed by Reflexive Entertainment. It was released in September 2001 for Microsoft Windows.

When the alien hunter's ship is shot down by an unknown attacker on the surface of a planet, there is no other option for Zax and Zelon to get the ship to planet in order to survive. Zax soon encounters the force behind his presence here: Om, the leader of an army of robots that enslaved local primitive tribes of Korbo. Zax, all while collecting the minerals he sought for, has aligned himself with the Korbo and started a crusade against Om. On his way through the jungles, temples, caves, and mines, he is aided by Korbo leaders, like Mindaza, Valeth, Butu, and Partha. Mindaza presents Zax with Sphere of Zin, a powerful artifact which could detect any evil forces near him: it comes in handy to detect robots that approach. Zax witnesses as Om forces Korbo into slavery in the mines, and also turns some of them into cybernetic drones to serve himself. On his way, Zax is often opposed by Om's servant, mysterious "spirit" Azah-Pan, which possesses a robot to fight him. Slowly, a rebellion is formed, led by Mindaza and Valeth. Even though all other leaders of Korbo are assassinated, Zax is nevertheless successful in locating the Om ship and entering it.

Deep inside the ship, Zax confronts Om and destroys him. Moments later, Valeth appears, and reveals the truth about what was happening. It turns out Om and his robots arrived on the planet to harvest the minerals, however, Valeth find a way to fully control the robots, while other Korbo feared them. Valeth toyed with them for a while, but then come up with a plan to eliminate the ruler of all Korbo tribes, Marsindor, and his family, turn Korbo into Om' slaves and then liberate them, becoming a hero and, most importantly, the new chieftain of all tribes. All of Valeth's requests were actually targeted on Zax being killed, while Azah-Pan, a major obstacle in Zax' way, was in fact Valeth himself. The traitor also explained that he feared Sphere of Zin, which detected him as an enemy, and thus never meet with Zax while robots were not around. Shocked with this discovery, Zax kills Valeth. Later, he, Mindaza, and other Korbo celebrate the victory, with Zax receiving giant crystal as a gift and finally leaving the planet.

The main character is Zax, an alien humanoid who crashlanded on an unknown planet, which is overrun by hostile robot forces. His goal is to navigate through the planet and help local people, the Korbo, to defeat robots. Zax: The Alien Hunter is an isometric shooter. The arrow keys are used for the movements from an isometric view, while the mouse takes care of aiming. A role-playing game element is also present, as the player is required to collect ore and crystals to assemble new weapons and items. The main accent in shooting mechanics is placed on enemy teleporters, which constantly spawn new robots unless a console is destroyed, which is usually somewhere nearby. While clearing the levels, Zax's enemies will be robots, plus some of planet's dangerous wildlife. The game has several multiplayer modes, like CTF, salvage king, and deathmatch.