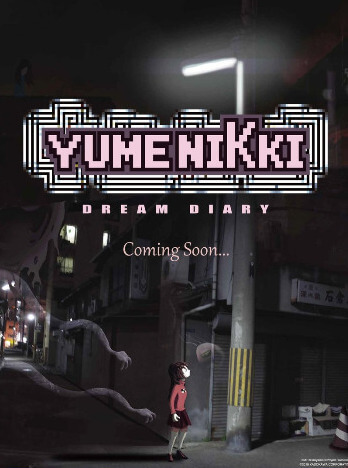 Yume Nikki (ゆめにっき, lit. Dream Diary) is a surreal adventure game by pseudonymous Japanese developer Kikiyama. In the game, players explore the dreams of a hikikomori named Madotsuki, where they encounter a number of surrealistic horror creatures and locations. The game was created using RPG Maker 2003, but has few elements commonly associated with role-playing games, such as battle, leveling up, and quests. The game's primary objective is to collect items called "effects" that can help progress to new areas and discover secrets.

The initial version was released as a free online download in June 2004 with subsequent updates over time, the last occurring in 2007. It was later released on Steam by publisher Playism in January 2018. A 3D reboot, Yume Nikki: Dream Diary, was released the following month. In addition, various fangames inspired by it have also been released.

Players control a hikikomori named Madotsuki (窓付き, lit. windowed) at home in her apartment, the only area she can explore when awake.

After Madotsuki falls asleep, she begins to dream. Madotsuki's dream resembles the room she's in, except she is able to leave the room. This takes Madotsuki to a nexus of 12 doors, with each leading to a different world. These 12 worlds, in turn, connect to a number of other worlds, forming a large and expansive area for the player to explore. The purpose of the game is for the player to navigate these dream worlds to obtain 24 objects, known as "effects".

There is no way to encounter a game over in the game, though enemies do exist in the form of NPCs that can teleport the player to inescapable areas, forcing them to wake up or use an effect to return to the nexus.

Originally a little-known game that became popular on the Japanese forum 2channel, the game gained a following outside Japan after an unofficial English translation was released. After gaining a cult following on 2channel, popularity of the game quickly increased by viral means among Japanese players. The first public release of the game took place on June 26, 2004, as a demonstration preview of an incomplete game. With each following version from 0.01 to 0.09, new features and content were progressively introduced, along with various bug fixes. The latest version, 0.10, featured general bug fixes and became available on October 1, 2007. Over a decade later, the game was released on Steam by publisher Playism on January 10, 2018.

Independent game designer Derek Yu enjoyed the game, comparing its visual theme to EarthBound and stating "The lack of dialogue or any 'action' fills me with this strange sense of dread". Gamertell's Jenni Lada scored the game 85 out of 100. She praised the unique premise, distinct art style and abstract gameplay which evokes a "dream world experience". Lada noted the geometry of the dream areas, which allows for loops and exitless rooms, and found that it could be "winding and confusing". Whilst she warned that it won't be to everyone's tastes due to "dark or graphic imagery" and found the ending to be disappointing, she concluded that Yume Nikki was worth experiencing. Kotaku's John Jackson praised the game for its ethereal dream-like setting and its non-linear gameplay mechanic, stating, "Out of every games sic about dreams, this is the one that probably comes closest to actually resembling one". He goes on to argue the game's limitations and vast, undefinable architecture forces the player to question their surroundings and the significance of the smallest actions and events that confront them.

The game inspired a large number of fangames with a similar style of gameplay, such as Yume 2kki and .flow. The game's structure was also a major influence on Lisa the First, the predecessor of Lisa: The Painful, as well as Undertale.

Various merchandise based on the game has been released under the "Project Yume Nikki" brand. The game was adapted into both a manga and a light novel. The light novel is titled Yume Nikki: Anata no Yume ni Watashi wa Inai, and was written by Akira. The title was licensed for digital distribution in the English language by J-Novel Club. The manga was illustrated by Hitoshi Tomizawa, and was serialized in Takeshobo's web manga magazine Manga Life Win+ from May 2013 until March 2014. A Vocaloid album, entitled Yumenikki no Tame no Waltz, was released on April 27, 2013. A two-volume official soundtrack, featuring all the original tracks for the game, as well as ten arrangements by doujin group INFINITY∞, was published in Japan by Glaive Music on August 31, 2014. A two-volume version of the soundtrack was also released on iTunes and Amazon Music in 2014. An app version of the Nasu minigame was released for iOS and Android devices in November 2013.

A 3D reboot of the game, Yume Nikki: Dream Diary, was released for Windows on February 23, 2018. It was developed by Active Gaming Media under supervision and cooperation from Kikiyama, featuring some unused design concepts from the original game. It was revealed after a two week countdown on Kadokawa Corporation's website following the release of Yume Nikki on Steam. It was also released for the Nintendo Switch on February 21, 2019.