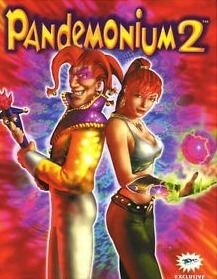 Pandemonium 2 is a platform game developed by Crystal Dynamics for PlayStation and Microsoft Windows. It is the sequel to Pandemonium!.

Pandemonium 2 is a psychedelic 2.5D game; specifically, it renders characters and environments with polygons and uses a 3D camera to create the appearance of 3-D, while gameplay is actually on a 2-D plane. Players can choose to be either Nikki or Fargus - who each have different specialties - with the option to change for each level. The player characters abilities have been expanded over those in Pandemonium! with the ability to climb ropes, crawl, and pull themselves up ledges. During the quest, players can earn extra lives by collecting treasure.

Unique powers collected during gameplay may replace, extend or add to previous powers, depending on which character is in play and which power obtained. The characters handle the unique powers differently. For instance, collecting the "fire power" allows Nikki to shoot destructive fireballs, while it grants Fargus invincibility and a deadly touch, but requires him to constantly move forward. Machines and equipment are also available throughout the game, although they are tied to certain areas.

There are four boss stages, set after a block of stages has been completed. Destroying the bosses usually involves small puzzles, such as catapulting fireballs at a flying boss, or surviving the onslaught of a giant mecha boss while balanced on the back of a large, fast moving tank.

Should the player collect +80% of treasure in a level, they will have access to the bonus level "Boarder Run", where they must slide along a course collecting treasure, while simultaneously keeping ahead of a pursuing vortex. Failure in "Boarder Run" does not cost player lives; successfully completing "Boarder Run" will result in the player earning at least one extra life.

The player begins with four hit points to represent health. Through bonuses, this can be expanded up to a maximum of 16. To achieve maximum hit points, the player must find one of several "life pieces" in hidden areas of the game. When all points are lost, the character loses a life and returns to the last checkpoint. When all lives are lost, the game is over.

When the magic-infused "Comet of Infinite Possibilities" is about to pass over Lyr for the first time in 300 years, the inhabitants race to reach the comet in order to make a wish on its powers. Nikki (voiced by Deborah Ben-Eliezer), a curvy and sassy sorceress, decides that stealing the source of its magic is a quicker way to reach power than study. Her bosom buddy, Fargus (voiced by Martin Ganapoler), a court jester, has gone insane over the years and has a simple plan to "touch pretty fire" upon reaching the comet. Sid (also voiced by Martin Ganapoler), a sharp tongued head on a stick and Fargus's only other "friend", wishes to get rid of Fargus and get closer to Nikki. But the evil Goon Queen Zorrscha has her sights set on the comet as well. Nikki, and Fargus must make it to the comet before she does, lest she fulfill her own morally questionable wishes.

The ending of the game varies by which character defeats the final boss. If Nikki succeeds in the quest, she gains control of the universe. If Fargus does, he creates a world in which he is the flowers and the trees, as well as the sun, which makes Sid fume to the point where his head explodes.

The game received an average score of 77.11% at GameRankings, based on an aggregate of 9 reviews.

GameSpot's Lauren Fielder summarized her review by stating that Pandemonium 2 is "a fun and mostly unpredictable platform game, in spite of not being fully 3D."