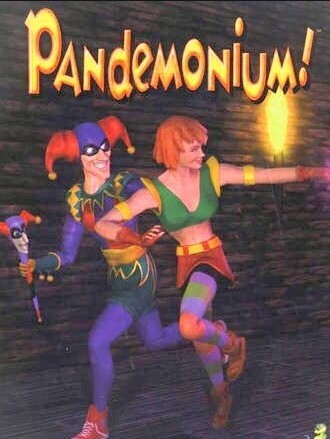 Pandemonium! is a 1996 platform video game developed by Toys for Bob and published by Crystal Dynamics for the PlayStation, Sega Saturn, Microsoft Windows, N-Gage, Mobile and iOS. Pandemonium! features Fargus, a joker, and Nikki, a sorceress, who unwittingly casts a spell that destroys the town. The goal of the game is to reach the Wishing Engine, where they can wish the town back to normal. For each level, the player can choose which character to be. Each has a special move – Fargus can deliver a special spinning attack, and Nikki can double jump. The game consists of a great variety of unique gameplay objects, such as watermelons, clouds, spider webs and logs. A sequel called Pandemonium 2 (Miracle Jumpers in Japan) was released in 1997 for PlayStation and Microsoft Windows.

Pandemonium! employs "2.5D gameplay". While the game renders polygons in a typical 3-D fashion, gameplay is 2-D. The area of gameplay can be described as a two-dimensional surface twisting and bending in a three-dimensional world. Occasionally, this surface will overlap itself. There are also segments where the path branches, allowing the player to choose their course.

Enemies are generally defeated through the usual platform jumping method of bouncing on the enemy's head. However, there are also power-ups located in each level, with varying effects. One is a freeze ray which turns enemies into ice, while another is a shrink ray which reduces the size of enemies to the point where the player character can simply step on them.

In the land of Lyr, an unpopular carnival jester called Fargus, and his stick-puppet Sid, are seeking a new career. Meanwhile, a talented acrobat named Nikki, bored of carnival life, runs away to pursue her dream of being a wizard. Fargus, Sid, and Nikki meet at a "Wizards in Training" seminar at Lancelot Castle. The seminar turns out to be rather boring, so during a break Nikki and Fargus steal the speaker's spellbook and take it to the high balcony overlooking the village.

When Nikki begins practicing with the magical book, Fargus and Sid urge her to perform a 10th level spell. With a few magical words, a green monster called Yungo appears and consumes the entire village. They search the book for how to get rid of the monster. The book reveals that they'll have to obtain a wish from the Wishing Engine. With a map from the book to help them, they set off on their journey.

When they find the Wishing Engine, it tells them to speak three wishes. Fargus wishes for a chicken just to confirm that it works. Nikki wishes that the village was returned to as it was before the spell was cast. Nikki and Fargus are then teleported back to the top of Lancelot Castle. Yungo spits out the village and is pulled back into his own dimension. Nikki ponders what happened to their third wish, and Fargus guiltily admits that out of desire to share his joy with the world, he wished that everyone back home could be just like him, inadvertently turning everyone in the village into Fargus clones. Nikki and Fargus resign themselves to another trip to the Wishing Engine.

The PlayStation version of Pandemonium received mixed to positive reviews. Critics generally said that while the gameplay is essentially 2D, the open, airy graphic designs and the exceptional camerawork make it easy for players to be caught in an illusion of 3D. Most found that the gameplay was lacking in innovation, though the diverse and surprising level designs made it enjoyable and relatively fresh. Some critics also complained that the "boing" sound which accompanies each jump is annoying. GamePro concluded the game to be a mixed bag, and advised gamers to rent it to determine if it fits their interests. Dan Hsu of Electronic Gaming Monthly felt it had little to offer besides the graphics, but the other three members of the review team were much more enthusiastic, saying they particularly enjoyed searching out the levels' secrets. GameSpot gave it a largely negative review, arguing that the level design is flawed and the two playable characters are not differentiated enough. They also criticized Burke Tresichmann's music for having tracks which are too juvenile and/or similar to his scores for The Horde and Captain Quazar. However, GamePro and Sushi-X of Electronic Gaming Monthly opined that the music was both well done and consistently suited the tone. Next Generation summarized that "while Pandemonium keeps the player on rails, it's still an enjoyable and extremely colorful ride."

The Saturn version was also well-received, as critics agreed that despite the half a year that had passed since the game's release on PlayStation, it still held up well. Sega Saturn Magazine and Saturn Power both deemed it the first truly outstanding platform game for the Saturn. GamePro said that "It breaks little new ground beyond the cool perspectives, but the gameplay's meaty enough to hold your interest." Sushi-X of Electronic Gaming Monthly said it "is a step above its PlayStation sibling", citing tighter controls. However, his co-reviewer Shawn Smith and GamePro both felt the PlayStation version was better, due to the port's slight decrease in graphical quality, though critics unanimously agreed that Crystal Dynamics had done an overall exemplary job of optimizing the game for the Saturn.