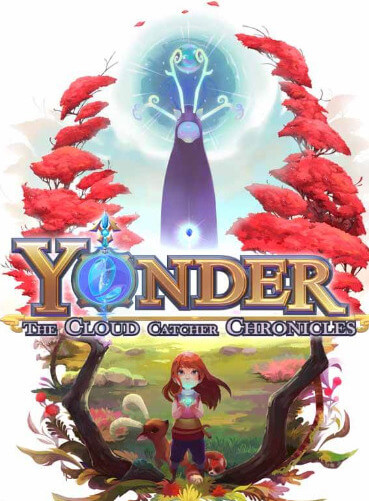 Yonder: The Cloud Catcher Chronicles is an adventure video game developed and published by Prideful Sloth for PlayStation 4 and Windows. It was released on 18 July 2017. On 17 May 2018 a Nintendo Switch port was released on the Nintendo eShop, with a physical version releasing on 12 June 2018 published by Merge Games.

Yonder: The Cloud Catcher Chronicles is an adventure game set in an open world environment and played from a third-person perspective. A primary goal of the game is seek and collect magical creatures, known as sprites, to banish an ominous shroud known as the Murk. Throughout the adventure, the player can take part in activities like farming, fishing, and crafting while exploring the island.

The game takes place on an island that features eight distinct biomes, such as tropical beaches or snowy mountains. As times passes in the game, the world's seasons change. It also features a dynamic weather system and day-night cycle. The player character is customisable.

The player character is shipwrecked on a magical island called Gemea. A mysterious, dark fog known as the Murk is polluting the environment and causing distress to the island's inhabitants. Now it is up to the player to restore the island by finding sprites to dispel the Murk.

Yonder: The Cloud Catcher Chronicles was developed by Australian indie video game studio Prideful Sloth. It is the team's debut game, although their staff is composed of industry veterans. Lead designer Cheryl Vance mentioned that aspects from games like Harvest Moon, Animal Crossing, The Legend of Zelda, and Skyrim were key influences in the design of Yonder.

The game was released for PlayStation 4 and Windows on 18 July 2017.

Yonder: The Cloud Catcher Chronicles received "mixed or average" reviews from critics, according to review aggregator Metacritic. It was nominated for "Best Game Audio Article, Publication or Broadcast" with "Yonder: The Cloud Catcher Chronicles: An Audio Development blog in two parts" at the 16th Annual Game Audio Network Guild Awards, and for "Family & Kids" at the 2018 Webby Awards.