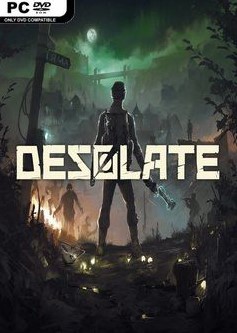 The game takes place on a fictional island named Granichny, where secret experiments resulted in a massive "mutation" of the world. The player assumes the role of a Volunteer, who must research the paranormal activities of the island, gathering information and undertaking dangerous tasks.

Desolate is a survival game set in an open world environment. It contains a dynamic day and night cycle, and is played from a first-person perspective. Most of the gameplay is built around combat, exploration and campaign storyline progression. The game can be played either in single player, or with up to four-player co-operative multiplayer.

The game’s combat is mostly melee-based, with ammo for firearms being very rare. Players can use different weapons, which can be found throughout Granichny, as well as gathered from enemies. The weapons can also be upgraded with different modifications. Players can repair their weapon a limited number of times.

The game tracks 5 main elements of survival: Health, Hunger, Thirst, Cold and Stress. While travelling around the game, players find various medical supplies, food and water, which can be used to restore the according element. Players can also find different crafting ingredients and blueprints, which allow them to create new items and equipment.

Throughout the game, players earn Experience Points (XP) by completing tasks and defeating enemies. After gathering enough XP, players earn a Skill Point - which can be used to unlock various abilities and enhancements in one of the 3 Skill Trees: Crafting, Fighting and Survival.

The core gameplay of Desolate is based on Beyond Despair - a game developed by Pixelmate, and released on January 16th, 2017. Beyond Despair was not a commercial success, and Pixelmate was closed due to its financial situation.

A part of the old team created a new studio, with financial support by HypeTrain Digital, refining the gameplay from Beyond Despair, while adding new content. Most of the gameplay changes were directed by fan input. All Beyond Despair owners received a free copy of Desolate.

The game was on Steam Early Access, and now the full version is available.