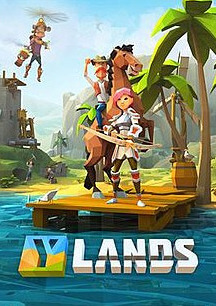 Ylands is a 2019 sandbox game developed by Bohemia Interactive.

Developers describe Ylands as "sandbox exploration adventure and a platform for making custom games". The game has been compared to Minecraft and features a built-in editor that allows players to make their own scenarios.

Ylands gives players freedom in creation and modification of the countryside. Players can create their own character and choose an environment. Environments include temperate, tropical, winter etc. The editor allows the player to create their own scenario which allows gameplay set in different eras such as Wild West, medieval Europe or a steampunk world and others. Developers stated that they do not want to make any boundaries for players.

The game was released on 5 December 2019. The game switched to free-to-play as it was released.