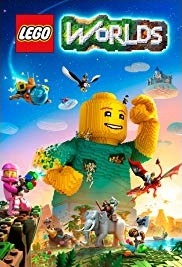 Lego Worlds is a Lego-themed sandbox game developed by Traveller's Tales and published by Warner Bros. Interactive Entertainment. The game allows players to build constructions in a 3D procedurally generated world. A beta version of the game was released on 1 June 2015 on Steam Early Access. It was released on 7 March 2017 for Microsoft Windows, PlayStation 4, and Xbox One. A version for Nintendo Switch was released on 5 September 2017 in North America and 8 September 2017 in Europe.

Lego Worlds is a sandbox video game which allows players to build a world made up of Lego bricks. The player is rewarded for collecting objects spread across the map with "studs", an in-game currency. The player can build using the items they have encountered. Players can create their own world by using predefined Lego structures or using the "brick-by-brick editor tool". Players' appearances and outfits are customizable in the game. Terrain and environment can be modified via landscaping tools. A variety of vehicles, such as helicopters, and creatures are featured in the game. A multiplayer option and features for world-sharing have been added to the game through later updates.

Prior to the game's official release, it was teased in the back of a Lego set's construction manual. It was formally announced on 1 June 2015 with a simultaneous early access release on Steam to allow the gaming community to provide feedback for continual improvements and the integration of additional content over time. The game left early access and Warner Bros. released the game for PlayStation 4 and Xbox One on March 8, 2017. The Nintendo Switch version was released in September 2017.

Reception was generally positive, though players had mixed opinions in some cases. Metacritic gave the Nintendo Switch, PC, PlayStation 4, and Xbox One versions a score of 59/100, 71/100, 66/100, and 69/100 respectively. The game was nominated for "Family Game" at the 14th British Academy Games Awards.