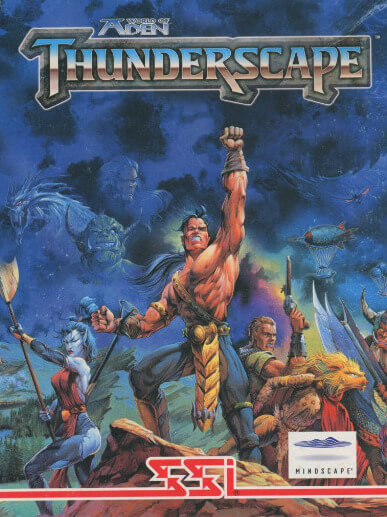 World of Aden: Thunderscape is a 1995 swords & sorcery role-playing video game for DOS, developed by Strategic Simulations and published by Mindscape.

The game is based on the world described in the fantasy trilogy World of Aden: Thunderscape. The player controls a party with up to six members with skills, spells and equipment.

Strategic Simulations Inc. was the developer of World of Aden: Thunderscape, while Mindscape, Inc. was the publisher. It was released in early 1995; a follow-up, Entomorph, was also released that year. The property was acquired by Kyoudai Games in 2013; the company plans to release a new pen and paper role-playing game for the property.

It was re-released in 2013 on GOG.com with Windows support.

The world of the Thunder Age has a distinctly steampunk feel. The world has recently and drastically changed from medieval swords-and-sorcery to a mixed renaissance and Industrial Revolution tech level. Flintlocks and muskets are the best weapons an adventurer can hope for, but there are extremely expensive, very powerful machine guns called "storm cannons." The world has also recently fallen under the effects of the "Darkfall", an event causing thousands of demons or "nocturnals" to enter the world, along with Corrupted, those who have made a deal with the forces of the Darkfall for power-and usually a curse of some sort.

Entomorph, while sharing the same setting, is not a sequel.

A pen and paper role-playing game (RPG) was produced by West End Games. In 2013, Kyoudai Games acquired the rights to the game, and plans to publish a new version of the RPG. A year later in March 2014, Kyoudai launch the Core Rulebook of the Campaign Setting for the Pathfinder RPG.

T. Liam McDonald of PC Gamer US wrote, "It's fun, it's different, it's well-done, and it promises great things for the future of this World of Aden line." The magazine left its Game of the Year award category for "Best Roleplaying Game" empty in 1995, as the editors believed none of the year's releases were strong enough to deserve it. However, the editors nevertheless highlighted Thunderscape as "a very good game", which "gave us hope for much better games in the future."

In Computer Gaming World, Scorpia wrote that Thunderscape's automap is "among the most horrible I have ever seen", and she found fault with the game's extensive length and lack of polish. While she enjoyed the first quarter of the game, she believed that its later sections devolved into an "interminable bore", which was "likely to appeal most to the devoted hack-and-slasher". The magazine later included Thunderscape in its holiday 1995 buyer's guide, where a writer noted that, despite the game's "minor problems", players "could do worse than visit ... this emerging world".

Andy Butcher reviewed Thunderscape for Arcane magazine, rating it a 6 out of 10 overall. Butcher comments that "It isn't a bad game. It's fun, and mildly absorbing. But it doesn't offer anything new and soon becomes boring."

In his book Dungeons and Desktops: The History of Computer Role-Playing Games (2008), the video game historian Matt Barton called Thunderscape and its companion Entomorph "well-crafted and highly playable games that attracted little interest from CRPG fans then or now."