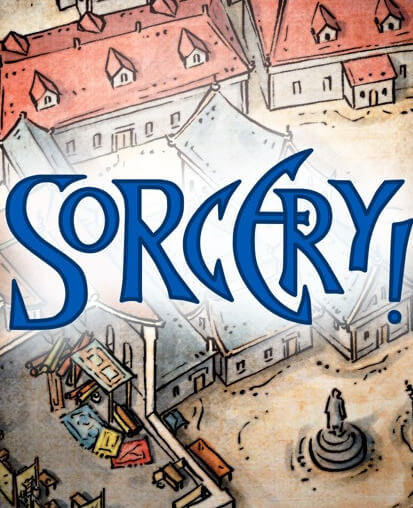 Sorcery! is a series of text/graphic adventure video games developed by Inkle for iOS, Android, and Steam having been first released on May 2, 2013. The games are based on Steve Jackson's Sorcery! gamebook novels: a four-part spin-off series of the larger Fighting Fantasy series.

The games are text-based fantasy quests based on Steve Jackson's choose-your-own-adventure novels, and incorporate visual and interactive elements not present in the gamebooks. They also contain expanded content vis-à-vis the original gamebooks. Additions include a different combat mechanic that includes turn-by-turn energy, the inclusion of your spirit animal, and spelling out names of spells from a star sky.

The first entry Sorcery!: The Shamutanti Hills was released by Inkle in May 2013 on the iOS App Store and was a 'Game of the Year' finalist for TouchArcade, Mashable, and Gamezebo. The subsequent iOS releases were Sorcery! 2: Kharé - The Cityport of Traps in October 2013, Sorcery! 3: The Seven Serpents in April 2015, and Sorcery! 4: The Crown of Kings in September 2016.

The first and second parts of Sorcery! were released as a single volume onto PC and Mac through Steam in February 2016. Sorcery! 3 and Sorcery! 4 were released in April and September of 2016 respectively.

The game's innovative style of gameplay was lauded upon launch from outlets such as Hardcore Gamer, writing: "Sorcery! is one of the best games that this reviewer has played on the iPhone and iPad, offering a plethora of options and an excellent story." IGN gave similar praise, adding: "Sorcery! relies on the often-ignored power of strong writing, and it’s better for doing so." It has a Metacritic score of 85 out of 100 based on 13 critic reviews.