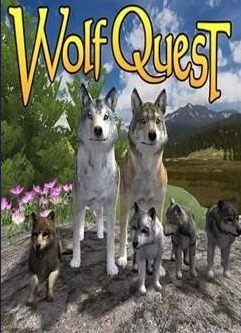 WolfQuest is a 3D wildlife simulation video game originally developed by the Minnesota Zoo and game developer company Eduweb, and developed solely by Eduweb since 2013. The game's main purpose is to help players understand wolves and the roles they play in nature by being virtually incarnated as a gray wolf themselves. WolfQuest challenges players to learn about wolf ecology by living the life of a wild wolf in Yellowstone National Park and is a family-friendly, fun game for people of all ages.

The game was originally funded by grants from the National Science Foundation, Best Buy, and other foundations and donors and distributed as a free download for Mac and Windows computer. In November 2015, Eduweb released a WolfQuest 2.7, an improved and expanded version of the game for purchase. While the old, free version of the game remains available, development efforts are now focused on new versions, particularly WolfQuest 3: Anniversary Edition, a complete remake and expansion of the game.

In single player, the player must survive as a dispersal gray wolf in Yellowstone National Park. To do so they must hunt elk, moose, and hares, or feed off elk carcasses. They must also avoid dangers such as grizzly bears, coyotes, and non-dispersal wolves. However, it is possible to fight off the bears and coyotes by chasing them, and fight off other wolves. They have the option to find a mate, which, when successful, will follow and aid the player throughout the rest of the game. In order to find a mate, the player must first earn 800 experience points, mainly by hunting elk, and then search for a mate which can be found in all territories.

When creating their wolf character, players are free to choose the gender, fur coloration, stats, and name of their wolf. There are a variety of pelts to choose from (organized by packs), with two sliders that let players change the tints of the guard hairs and undercoat of the wolf. WolfQuest 2.7 added many new customization features, including more pelts as well as injuries and a radio collar. Just like real wolves, males are larger in size than females.

Upon leaving Amethyst Mountain, players (with their mate) enter the Slough Creek map and search for a den to raise pups in a new location, Slough Creek. However, after finding a densite, the player must scent mark the area around the den to make it safe from predators and stranger wolves. After completion, the player will obtain pups. Ravenous bears, coyotes, eagles, cougars, and wolves roam the earth, posing a new threat to young pups as they wait to snatch one up under a novice parent's nose. At the end, you, your mate, and your surviving pups must make a journey for the summer den in the Douglas fir forests. But the player, the player's mate, and pups will run into grizzlies, coyotes, eagles and drowning. The only way pups can get across the river is by finding a shallow sandbar. Wolf territories will also expand, so the player cannot take an easy way out.

In the game, players have the opportunity (though not a mandatory option) to raid a cattle ranch for extra food in the Night Mission. The player sneaks around in the dark at a cow ranch, and searches for the calf to kill and feed to his/her pups. However, doing so is extremely dangerous and can result in being shot - a warning that the player is close to being shot, is hearing dogs barking. The player has approximately a minute to find the calf and kill it and consume it.

In multiplayer, the objectives of the game are the same with two exceptions. The player co-operates with a maximum of 8 wolves including themselves, and can have no game-sanctioned mate. (Regardless, some players still say that other players are their mates.) Public multiplayer games allow anyone to join. Private games require a game-name and password and allow text and voice chats. (Text chats are filtered through a standard badwords list.) Players are encouraged to report any behavior that breaks the multiplayer rules.

Players in multiplayer can start rallies and hunt bull elk and moose. Bull elk have more meat than female elk and are many times harder to kill. Moose are far more difficult to hunt than any of the elk, and will take some time to kill, but the reward of meat is greater. Players may bite elk in the neck or back legs while hunting. WolfQuest 2.7 added a multiplayer mode to the Slough Creek mission arc, so players can raise pups together and journey to the rendezvous site.

Tales of Aravorn: Seasons of the Wolf
hit
upd
new