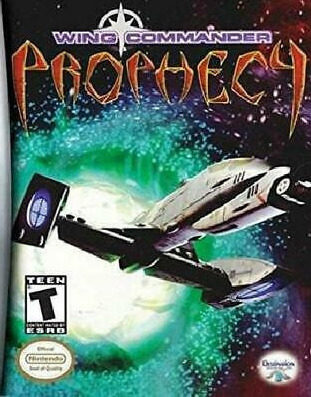 Wing Commander: Prophecy is the fifth installment in the Wing Commander science fiction space combat simulator franchise of computer games. The game was released in 1997, produced by Origin Systems and Italy-based Raylight Studios for the GBA, and distributed by Electronic Arts.

The game features a new game engine (the VISION Engine), new spacecraft, characters and story elements. The events depicted in Prophecy are set over a decade after Wing Commander IV: The Price of Freedom and, rather than the Kilrathi, the player must deal with a new alien threat, an insectoid race codenamed Nephilim that has invaded the human galaxy through a wormhole. Prophecy was the first main-line Wing Commander game in which the player did not take on the role of Christopher Blair, instead being introduced to a new player character, Lance Casey. Some of the characters and actors from previous games return in Prophecy, where they rub elbows with an entirely new cast of Confederation pilots and personnel.

A standalone expansion pack, Secret Operations, was released by Origin in 1998 solely over the Internet and for no charge. The large initial file challenged the dial-up connections of that day. Secret Operations was later released for sale in combination with Prophecy in the Wing Commander: Prophecy – Gold package. A Game Boy Advance port of Prophecy with added multiplayer was released in 2003.

Controls are available in two modes: basic, catering for new and casual players, and advanced, aiming to give a more realistic feeling of space combat. The two modes leverage the same flight dynamics engine but in basic mode turning the ship around is assisting the player by coupling pitch, yaw, and roll (emulating airplane flight dynamics), while in advanced mode each axis is made independent for more complex but increased control, especially when using a HOTAS setup. There is also the possibility to temporarily disable the coupling system that assists the player in keeping thrust forward as the player pivots along the axes as if the spacecraft was an airplane: when this assisting system is disabled it is therefore possible to tilt the spacecraft using thrusters while keeping movement constant through inertia, as is realistic in space, and allowing for advanced offensive and defensive maneuvers, such as drifting sideways alongside a capital ship while shooting at it or quickly pivoting 180 degrees around and shooting at a chasing fighter.

Missions are played in sequence, and while the core scenario is constant, it is possible to fail missions and keep going forward in the game. Subsequent missions may become increasingly harder as the enemy gains an upper hand on the operational theater. As is traditional for the Wing Commander franchise, the player is placed in command of a flight of fighters, piloted by various non-player characters. Some of them may be killed during missions, resulting in a KIA in the leaderboard; however, others are plot-critical and will make use of their ejection seat to escape an exploding craft.

In between missions, the player may explore the TCS Midway, the carrier vehicle upon which they are stationed, and engage various characters in conversation. These conversations were filmed in full motion video, with Mark Hamill, Tom Wilson, Ginger Lynn Allen and others reprising their roles from prior games.

Lt. Casey is assigned to the TCS Midway during her shakedown cruise. The brainchild of Commodore Christopher Blair, who is in command. As the ship is put through her paces, the crew encounter destroyed Kilrathi vessels and evidence that a threat foretold by their prophecies, the "Nephilim," have returned. Casey, alongside the rest of the Midway pilots, must fight through their forces to the wormhole through which they have emerged, and attempt to stifle their threat.

Wing Commander: Prophecy was the first Wing Commander game made after series creator Chris Roberts left Origin, though the game engine was taken from Roberts' last project with Origin, the unfinished game "Silverheart".

Next Generation reviewed the PC version of the game, rating it four stars out of five, and stated that "Wing Commander Prophecy offers enough solid gameplay and eye-catching graphics to satisfy even the most demanding space combat fan."

PC Data, which tracked computer game sales in the United States, reported that Wing Commander: Prophecy earned $6.7 million and sold roughly 195,000 copies by October 1999. Its revenue in the country represented a drop from Wing Commander IV.

Wing Commander: Prophecy was nominated in the Academy of Interactive Arts & Sciences' first annual Interactive Achievement Awards in the category "Computer Action Game of the Year".

The editors of Computer Games Strategy Plus named Wing Commander: Prophecy the best "Sci-Fi Simulation" of 1997.