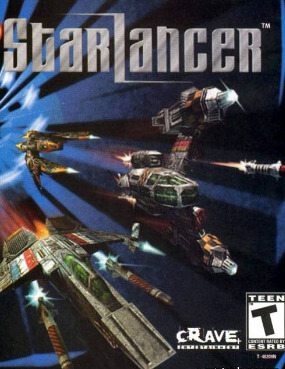 It is the year 2160. Mankind has colonized the solar system and two political entities have emerged: the Alliance consisting of American, Australian, French, Spanish, Italian, Japanese, British and German forces, and The Coalition of Russian, Chinese and Middle-Eastern interests. The game begins with a surprise attack on Fort Kennedy, where a peace treaty turns into a bloodbath: all of the inner four planets are overrun, including Terra herself, and the Italian and French fleets are utterly lost. The Alliance fleet regroups at Triton, Neptune's moon, and attempts to regain lost territory. The player takes the role of a rookie pilot in the international 45th Volunteers squadron, under the command of Captain Robert Foster and Wing Commander Maria Enriquez, aboard the re-commissioned British carrier ANS Reliant.

As with Wing Commander: Prophecy, the pilot's flying ability is the only measure by which success and failure are defined, though Starlancer does not feature as many branching mission paths. As in Wing Commander I the pilot may be promoted throughout the course of the campaign; unlike WCI, their rank determines which fighters and missiles they may choose to employ during each mission. The game provides a "virtual carrier" through which to navigate, including nearby crewmembers whose reaction to you depends on your current rank and standing. The game uses textual and video news broadcasts to keep the player informed as to the status of the rest of the war. Players frequently find themselves flying alongside squadrons and pilots they have heard about on the news just recently, providing a dose of "celebrity exposure" and this gives the sense that the player is just one part of a much larger war effort.

Starlancer's story is continued in Chris Roberts' Freelancer project, though the two belong to different subgenres (the first is purely focused on action, the latter also features trading and the player can freely move through the game's universe when they are not on a mission).

The game allows the player to take control of 12 fighter-class ships, advancing in different areas, such as top speed, agility, armor, and shield power. Each have a number of hard points which can be used to mount weapons like guided missiles and dumb rockets. Ships are issued to the player as his or her achievements increase.

Starlancer was commercially unsuccessful. PC Data reported its sales at 28,685 copies and revenues at $1.21 million in the United States by July 2000, which Mark Asher of CNET Gamecenter described as a "major disappointment". He cited this performance as part of a trend of falling sales for space flight simulators and the wider flight simulator genre. According to designer Eric Peterson, Starlancer ultimately sold around 400,000 copies by late 2001—below expectations at Digital Anvil.