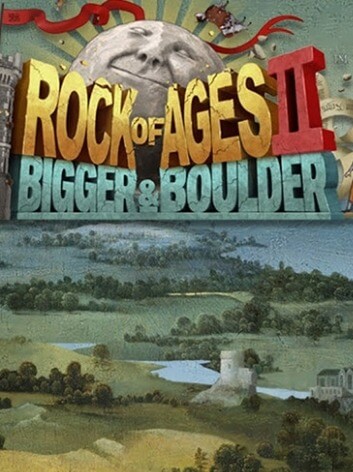 Rock of Ages 2: Bigger & Boulder is a tower defense racing video game developed by ACE Team and published by Atlus. The game is the sequel to the 2011 Rock of Ages, and was released in August 2017 for Microsoft Windows, PlayStation 4, and Xbox One. A Nintendo Switch port of the game released in May 2019.

Players must build their boulders, and roll them into the enemy gates as fast as possible, eventually breaking through and squish everything. This simple task is made more difficult by both sides' ability to pepper each other's lanes with traps, obstacles, and defenses.

Rock of Ages 2 was teased following the release of The Deadly Tower of Monsters, with ACE Team stating to already be "pretty deep in another project, unannounced yet." In June 2016, this project was announced to be Rock of Ages 2, and that was originally announced for a Q3 2016 release on Microsoft Windows, PlayStation 4, and Xbox One, but was delayed until August 28, 2017.