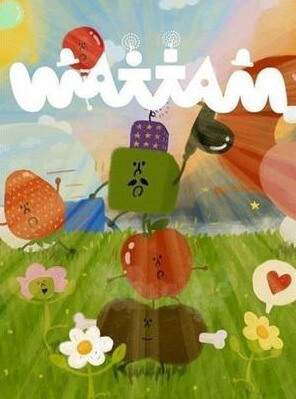 Wattam is an action game developed by Funomena and published by Annapurna Interactive. It was designed by Keita Takahashi, better known for creating the Katamari Damacy series, and was released for PlayStation 4 and Windows on December 17, 2019.

The game is played either solo or co-op, and consists of befriending other inhabitants of the world, including trees, flowers, rocks, toilets, poop, mouths, and more by holding hands, uncovering secrets, playing minigames, and solving puzzles. Characters each have unique melodies, which can be combined.

Originally revealed in December 2014 as a PlayStation 4 exclusive, Wattam was to be published by Sony Interactive Entertainment and developed jointly by Funomena and SIE Santa Monica Studio. However, it was revealed in October 2016 that Sony were no longer involved with the game. In August 2017, Annapurna Interactive was announced as the new publisher, and that it would additionally be released for Windows.

Regarding Wattam, designer Keita Takahashi said that he was "always" trying to make a game that makes people notice how "our ordinary life is great".

Wattam received "mixed or average reviews" from critics upon release according to review aggregator Metacritic.