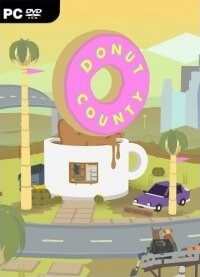 Donut County is an indie video game developed by American indie designer Ben Esposito and published by Annapurna Interactive. In the game, the player moves a hole to swallow objects, which makes the hole increase in size. The concept originated in a game jam that used video game pitches from a Twitter account parody of game designer Peter Molyneux. It later expanded to be the inverse of Katamari Damacy. Other inspirations for the game included Hopi figurines—a theme Esposito later relinquished—and locations from Bruce Springsteen songs. Donut County was released in August 2018 for iOS, macOS, PlayStation 4, and Microsoft Windows platforms while versions for Xbox One and Nintendo Switch were released in December 2018.

In Donut County, the players control a hole across several different levels. As players move the hole to swallow objects, the hole increases in size. There are some puzzle aspects to this; to swallow objects floating on top of water, the player may need to maneuver the hole to drain part of the water, and then have that water consumed by a bird, repeating this until the water is drained. Later in the game, the player gains access to a catapult that fits in the top of the hole. This can be used to fling certain items swallowed by it to hit outcroppings to dislodge objects or to trigger switches.

Human Mira works for her friend BK, a raccoon, at the local donut shop in Donut County. She finds BK more interested in a new mobile app, trying to earn enough points for a quadcopter drone, which he does by scheduling the delivery of donuts to the residents of Donut County. However, Mira discovers that these aren't donuts being set by the app, but actual holes which have been consuming the homes and residents of the place. BK refuses to acknowledge he did anything wrong, and when he receives his quadcopter, Mira purposely destroys it and then orders a donut to the shop, swallowing it up as well. They join the other residents trapped underground, and they all try to reason with BK of what he did was wrong.

They come to learn that this was part of the plan of the Raccoon King - to acquire more trash, the Raccoon King and other raccoons developed the app to swallow all the trash it could find, ignoring the whims of the people that lived there. Mira and BK launch a mission to stop the Raccoon King. As Mira uses a hole to wrack havoc within the raccoon's facilities, BK tries to convince the Raccoon King to stop what he is doing. The Raccoon King tempts BK with a lucrative position, while sending a giant quadcopter to fight off Mira. BK rejects the offer and races out to help hack the quadcopter and destroy it, destroying the raccoons' facilities as well. BK agrees to help return all the people of Donut County back to the surface.

Indie game developer Ben Esposito worked on Donut County in his free time while developing The Unfinished Swan. The core game concept was prompted by a game jam based on video game pitches from a Peter Molyneux parody Twitter account, Peter Molydeux. Esposito made a game called The Pits from a pitch wherein the player moves a hole around an environment. The game grew to work as a "reverse Katamari": instead of a ball that expands upon touching items, as in Katamari Damacy, the Donut County hole expands upon swallowing items. Esposito described the game as a "whimsical physics toy".

Donut County was originally called Kachina, based on the Native American "spirit beings that personify nature". Esposito was inspired by the design of Hopi doll sculptures. Following a blog post that expressed criticism of his treatment of Hopi culture, and his subsequent effort to make an "authentic game" that incorporated the culture, he decided to change the title and abandon the theme. Donut County also took inspiration from indie game Windosill's art style, Los Angeles's high density of doughnut shops, and locations from Bruce Springsteen songs, such as Asbury Park and the New Jersey Turnpike.

A demo of the game was featured at IndieCade in October 2012. Its goal was to knock the sun out of the sky by regurgitating objects once swallowed by the hole. Polygon's Michael McWherter noted that while some of its levels felt aimless or more like an "experiment" or "interactive toy", others "showed puzzle-like potential", including a level where chickens needed to cross a road. Rock, Paper, Shotgun reported that a presentation of the game at the GDC 2013 Experimental Gameplay Workshop made the audience "cheer and applaud in delight". The game was expected to show at the Austin, Texas, Fantastic Arcade event in September 2014. In March 2015, Esposito presented on the game's development at the 2015 GDC.

Donut County was released on August 28, 2018 for iOS, macOS, PlayStation 4, and Windows platforms, and for Nintendo Switch and Xbox One on December 18, 2018.

Cloudy with a Chance of Meatballs
hit
upd
new