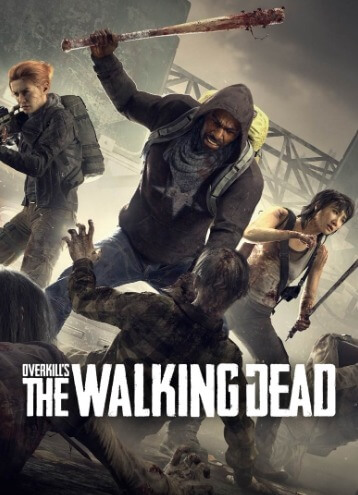 Overkill's The Walking Dead was a first-person shooter developed by Overkill Software and published by Starbreeze Studios and 505 Games. The title, based on the comics of The Walking Dead, has a strong emphasis on cooperative gameplay. The game was released worldwide for Microsoft Windows in November 2018 and the console version has been delayed indefinitely. In February 2019, Sony emailed all pre-order customers to communicate that the console port had been cancelled. However, shortly after, 505 Games confirmed that the game had not been cancelled for consoles, just postponed. On 26 February, 2019, Skybound Entertainment terminated their contract with Starbreeze Studio, leading to the discontinuation of all efforts on the game.

Overkill’s The Walking Dead is a first-person shooter with an emphasis on cooperative gameplay. The game features four characters, namely Maya, Aidan, Grant, and Heather. Each has their own unique skills and abilities, and players must work together in order to complete their objectives. Set in Washington D.C., a post-apocalyptic environment which was overran by zombies, the game is said to also feature stealth, survival horror and role-playing elements.

In post-apocalypse Washington, D.C., Anderson Banks loses his wife and daughter. Unable to cope, Anderson becomes suicidal, wanting the walkers to find him. Instead, he is found by Heather Campbell, a former kindergarten teacher. Together, they form a bond and bring more survivors together, eventually setting up Camp Anderson in Georgetown. The camp survives by scavenging food and supplies from the city and avoiding any dangerous locals, walkers and humans alike. Eventually, they are met by another group called "The Family," who makes Camp Anderson an offer: they can take half of the camp's food and supplies. Anderson gives them a counteroffer: they can leave the way they came. After threats are exchanged, the Family eventually leaves, but not long after, walkers appear and attack the camp. While the camp is successfully defended and barricades are rebuilt, the group learns that the walkers were a distraction, allowing the Family to raid the storehouse, kill some of the group, and steal the water purifier. Unwilling to accept defeat, Anderson orders Heather to lead a group to the Family's hideout and retrieve the purifier.

In Central Georgetown, Heather goes on a reconnaissance mission with Grant Moore, a seasoned hunter, and they infiltrate an apartment building. Inside an apartment with a good vantage point, Heather kills a walker with her pickax, while Grant uses his silenced sniper rifle to scout the Family's hideout. Through his scope, he sees walkers at the gates, a lot of the Family inside, and the purifier, which has already been installed. Heather then contacts Maya Evans, a former surgeon, via radio. Maya, along with Aidan Hunt, a former architect, infiltrates the hideout on its south side, where they regroup with Heather and Grant. Once inside, Aidan and Maya sneak up on two men and kill them with knives, and Heather quickly kills a third with her scoped crossbow. Maya quickly unhooks the installed purifier while Aidan keeps watch, getting his nailed baseball bat ready. When an armored guard with a riot shield and a revolver notices the dead bodies, spotlights are switched on and Maya is discovered. Heather tosses a smoke grenade at the guard, and Grant shoots the lock at the gates with his rifle, allowing the walkers to enter. With the water purifier retrieved, Maya shoots at the armored guard with her silenced submachine gun, but the guard blocks all shots with the shield. When Aidan attempts to kill him with his bat, he is simply knocked to the ground. Facing Maya again, he is shot at some more, but then Aidan shoots him in the back with a silenced shotgun. Maya helps Aidan up, and the group escapes into the streets with the horde coming after them. Heather fires a flare into the sky for Caleb Bernard, their getaway driver, to find them in his truck.

Later, Camp Anderson is attacked by the Family, attempting to steal supplies. Fortunately, the Family is driven back, but Anderson knows they will not stop coming. Heather suggests they steal a radio from the Family in order to listen in on their plans and prevent anymore surprise attacks. After finding and scouting another outpost in the West End, Heather, Grant, Maya, and Aidan infiltrate it and steal radio parts. With the radio built and working, the information Camp Anderson gains shows suspicious activity at the Family's main base, a former shopping mall in Foggy Bottom. When the group finds a way into the mall and makes their way to the roof, they instead find hostile soldiers from another group, called "The Brigade." Fighting their way through, the group makes their way inside the mall to find and rescue Reina, the leader of the Family.

Back at Camp Anderson, Reina reveals that the Brigade offered the Family to join them or die. When Reina agreed to join, the Brigade ordered the Family to supply them with a portion of their goods, thus being the reason why the Family continued to attack and raid Camp Anderson. The next morning, the Brigade finds and surrounds the camp. Hurst, their lieutenant, tells Anderson to "join or die." When Heather shows defiance, Hurst shoots her in the eye, killing her. This only angers Anderson and the rest of the camp, so they fight back, aided by Reina. However, the Brigade continues their onslaught, killing and wounding members of the camp and planting bombs, so Anderson decides to evacuate via Caleb's truck with some survivors, while others escape with Reina. After regrouping, Reina says she can radio Sarah Bridger, the leader of a camp in Eckington who has no love for the Brigade. Bridger agrees to guide the group via radio through the subway underneath Dupont Circle to make it to Eckington safely.

The House of the Dead: Overkill
hit
upd
new