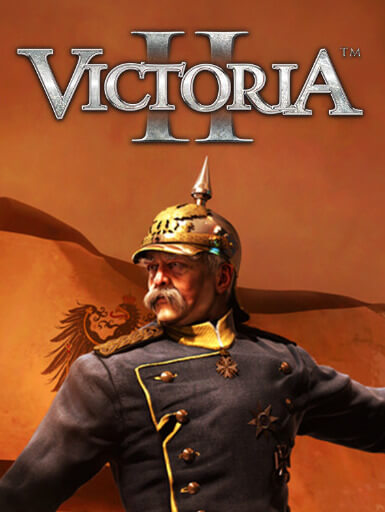 Virtual Programming published the Mac OS X version of the game on September 17, 2010, which is available on the App Store. The game was localized for Russia by 1C Company and Snowball Studios.

Like its predecessor, Victoria II allows for the player to take control of and manage a 19th-century state, including its political, diplomatic, economic, military, and technological aspects. The game has many historical aspects to it, such as the ability to colonize places that, at the time, were not under the control of any European power, such as Sub-Saharan Africa, and North-Western Canada. The time frame of the game is 1836-1936.

Victoria II spans the globe from 1836 to the start of 1936 with over 200 playable nations. Like its predecessor, Victoria II focuses on internal management, covering the industrialization and social/political changes in a country with 8 different government types. The game gives a lot of importance to the economy of a country by having a complex market system with over 50 types of goods and factories. While warfare is a component of the game it is not the primary focus as in other Paradox Interactive games such as the Hearts of Iron series.

Nations' populations are divided into cultures, religions, and occupations. There are several different population groups or "pops" being aristocrats, officers, clergy, capitalists, clerks, craftsmen, soldiers, labourers, farmers, slaves, artisans and bureaucrats, the last being additions to Victoria II. As in other Paradox titles, like Europa Universalis, historical missions called "decisions" that are micro-objectives in the larger game have been added. There are thousands of historical events and decisions as well. These events and nationalist forces can lead to the creation or disintegration of nation states.

Victoria II contains a number of changes and improvements from its predecessor. The interface was streamlined when compared to the original game, which was described by producer Johan Andersson as, "the interface God forgot". Automation of various tasks has been added, including trade and population promotion. The education system has received an overhaul by having clergy educate people of the same religion, and each population group now has their own literacy levels. Education and literacy's importance is reflected in the vast technology system that contains thousands of inventions. Additionally, the functioning of ideology in the game was tweaked such that population groups are more sensitive to changes in their country's situation, as well as inclined to agitate for specific levels of political and social reforms.

The economic system in Victoria II attempts to simulate the flow of resources in a world market. Every province in the game produces a resource in resource gathering operations (RGOs). Some resources, such as wheat, are demanded principally by the population. Other materials, like iron, are consumed primarily by industry, but are still tradeable.

The production and unemployment system from the original Victoria has been revised to better reflect market forces, whereas in the original, the state provided the funds for resources and the player possessed a wide range of options with which to build their economy, provided they had access to the proper raw materials. All resources can be collected or produced by industry. The game also has a cottage production system simulating pre-industrial economies.

Victoria II contains a deep political simulation reflected in 8 different types of governments, 7 ideologies and a new sphere of influence system, gunboat diplomacy, and a new election system with coalition governments and legislatures.

The diplomacy in Victoria II is similar to that of other Paradox titles. Each country has a relation value of –200 to +200 which represents how much they like each other. Diplomatic and in game actions shift this relationship around and it factors into the AI's decisions. However, Paradox Interactive has expanded parts of this system. War goals from Heir to the Throne, an expansion for Europa Universalis III have been integrated though they function in a slightly different way. More war goals can be added as the war progresses, although this depends on the population's temperament. Failure to achieve a war goal will increase the population's militancy, which can lead to revolts as well a loss of prestige.

In the game controlling a Great Power, one of the eight countries with highest total score, gives special diplomatic options not available to other countries. Great Powers do not just influence how a country sees them; they have the added ability to use their influence on other countries to change their perception of other Great Powers. The struggle for influence that the Great Powers wage around the world is not a simple bilateral basis but occurs with each other inside different countries, giving an added dimension to diplomacy which was not present in the original Victoria.

Warfare is regarded as a lesser priority than politics and economics in Victoria II, though it follows the basic pattern used in other Paradox grand strategy games, with armies moving between provinces and engaging enemy armies and capturing enemy territory. The basic combat system is a combination of the systems used in Europa Universalis III, Europa Universalis: Rome, and Hearts of Iron III. A key component to combat is "frontage": the number of units in an army at the front line, which decreases as technology improves to simulate the change from the roving armies of the Napoleonic Era to the continuous trench lines of World War I.

Several aspects of the military have been changed from Victoria. The base unit has been reduced from a 10,000-unit division to a 3,000-unit brigade, which is no longer raised from a national manpower pool but directly raised from a provincial soldier POP, to which the brigade remains connected. A new aspect to the military is reconnaissance. This is a value that gives a bonus (or penalty, if low) to capturing provinces and defeating enemy armies; in prolonged combat, however, the reconnaissance value drops. Units such as cavalry and aeroplanes have high reconnaissance values and are intended to be used as scouts.