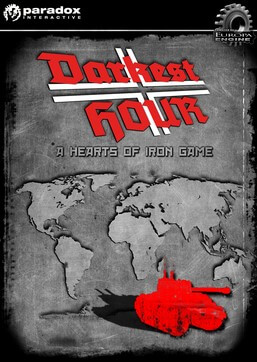 Darkest Hour: A Hearts of Iron Game is a grand strategy wargame that is based on Paradox Interactive's Europa engine.

In Darkest Hour, as is the case with other Hearts of Iron titles, the player can take control of almost any country that existed in the game's timeframe, which spans from 1914-1920 or 1933–1964 depending on the scenario. Management of the state includes its political, diplomatic, espionage, economic, military, and technological aspects. The game was released on 5 April 2011.

Darkest Hour is, at its core, an evolution of Hearts of Iron II: Armageddon. This has been considered crucial by the development team to make it easy to port community-made modifications from Hearts of Iron II to Darkest Hour. Moreover, the most important changes to the engines have been added as mods to the core game, with the name Darkest Hour Light and Darkest Hour Full:

Darkest Hour Full provides different grand campaign scenarios (where it is possible to choose any of the nations involved) or battlescenarios (focused on single theaters of operations, with only a few nations involved and playable).

The player can build land divisions, aircraft fleets, and naval ships/fleets, and combine these into corps and armies. The player also has the ability to control the appointment of military leaders of land, air and naval units as well as to control the appointment of individual government ministers and military commanders in key General Staff positions. The player can declare war, make alliances, claim and annex territories. The player can also alter the social and economic policies of their nation using sliders, such as democratic versus authoritarian, free market versus central planning and so on. Moving the sliders would result in different bonuses and penalties, allowing for a range of choices and strategies. Technological research is also controlled by the player. All this is on a global scale, with the player simultaneously dealing and interacting with nations across the world. The game can be paused at any point.

The game provides a launcher that allows the player to change its settings (like resolution, language, etc.) and eventually choose a mod to run on top of it.

The 1.02 patch, released on November 11, 201 added four new grand campaign scenarios and new functionalities (infantry units can now have two brigades and it is possible to upgrade a unit to a different model, for example a simple infantry unit can be upgraded to a motorized unit). The four new scenarios are: