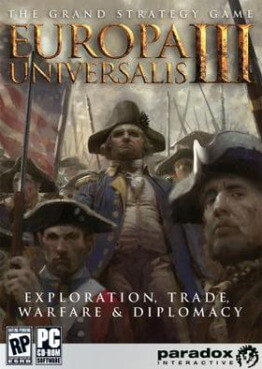 Europa Universalis III is a grand strategy video game developed by Paradox Development Studio and published by Paradox Interactive. The game was released for Microsoft Windows in January 2007, and was later ported to OS X by Virtual Programming in November 2007.

The player controls a nation and handles matters concerning war, diplomacy, trade, and economy. The original game without expansions starts in 1453, right after the Fall of Constantinople, and continues to 1789, just past the beginning of the French Revolution. The expansion Napoleon's Ambition extends the end game year forward to 1821, whereas the expansion In Nomine moves the starting year back to 1399, making it the longest as far as gameplay time in the series thus far.

Europa Universalis III has a 3D engine that requires the system to meet the Pixel Shader 2.0 specification. The map has 1,700 land and sea provinces encompassing most of the world, with 250 playable historical nations. The game also uses elements of other Paradox games such as Crusader Kings, Victoria, and Hearts of Iron II.

Players begin the game by choosing what date they would like to start their campaign and which country they would like to play as. Once in game, players can shape their countries in many different ways. Forms of government include various kingdoms, republics, theocracies, and tribal governments. Players can influence a nation's society and values by adjusting "sliders" such as free trade/mercantilism, and may hire court advisors such as Wolfgang Amadeus Mozart. As the game advances, players can pick "national ideas" such as Liberté, Égalité, Fraternité, which give specialized bonuses.

The game has over 300 playable countries, including giants like Ming China, regional powers like Bohemia and Kazan, and tiny nations like the Maldives. Without formal victory conditions, players sometimes set goals for themselves like raising a minor city-state to world prominence. The world map includes some 1,700 provinces and sea zones. Many provinces in the Americas, Africa, and Oceania are not owned by any country, allowing for colonization.

Economics in the early modern era is simulated by taxes and production income from provinces, as well as trade. National merchants compete in "centers of trade" such as Venice and Lübeck, and nations focused on trading income (e.g., Holland) enjoy significant advantages. Nations which mint too much currency, or are over-reliant on gold mining, are penalized by inflation. Technology investment is important in the long run; the game does not use a Civ-style tech tree, but instead has several different technology categories, which unlock new military units and buildings.

Diplomacy is rather detailed: royal marriages, insults, alliances, trade embargoes, and so on all affect relations between countries. Players are able to gain control over other countries peacefully through personal unions and vassalage. Early international institutions such as the Holy Roman Empire, the Papal Curia and with the Divine Wind expansion the Shogunate are simulated in some depth. Every country has its own culture and religion, a frequent source of diplomatic unity or friction.

Rulers have control over armies, navies, and mercenaries they recruit. Combat is abstract, with no direct control over battles (contrast the Total War games). Military tradition is necessary for recruiting good generals and admirals. Aggression (seizing provinces without a rightful claim) is checked by the "badboy" system of international infamy common to Paradox's games.

The game is historically detailed; one can play the "grand campaign" starting in 1453 or 1399, but any date before the French Revolution (1821 with the Napoleon's Ambition expansion) is a valid starting point as well, with historical leaders and countries appropriately updated. Major events such as the War of the League of Cambrai are playable this way. Often the game diverges from reality after some time in-game, with unhistorical events such as Portugal colonizing North America, or Poland-Lithuania surviving to bully its neighbors.

The game may be played single-player or multiplayer, with players controlling different countries; every non-human country is controlled by its own AI.

On 3 May 2007, an expansion named Napoleon's Ambition was announced by Paradox. It was officially released on 22 August 2007 via GamersGate, a digital distribution platform. The Windows version of the expansion is available as a download from GamersGate or as part of the Europa Universalis III Complete retail package, and aims to expand on EUIII with an improved interface, an enhanced trade system, expanded options, and the inclusion of more content to cover the extended time period. Virtual Programming published the Napoleon's Ambition expansion pack for Mac OS X on 7 December 2007.

On 5 March 2008, a second expansion titled In Nomine was announced. It was officially released on 28 May that same year. Features include: a further extension of the game's time frame, the addition of the Byzantine Empire, a revised AI which focuses on strategic top-level goals, and completely reworked rebels with their own goals and abilities. Virtual Programming published the In Nomine expansion for Mac OS X on 18 August 2008. The game now starts earlier, beginning in October 1399 after the coronation of Henry IV of England. Because the game's time frame has been extended by 54 years, it now includes nations such as the Byzantine Empire and the Jalayirids, leaders like Tamerlane, and events such as the end of the Hundred Years' War.

A key variation of the expansion is the ability for the player to make important decisions that will shape the future of their country. For instance, a player can choose to create the United Kingdom, make Paris "worth a Mass", or institute an East Indian Trade Company. They can now implement decisions on both country and province level with the new decision system, including hundreds of different decisions depending on situation (for example, the current state religion) and country.

All games from the serie "Europa Universalis"