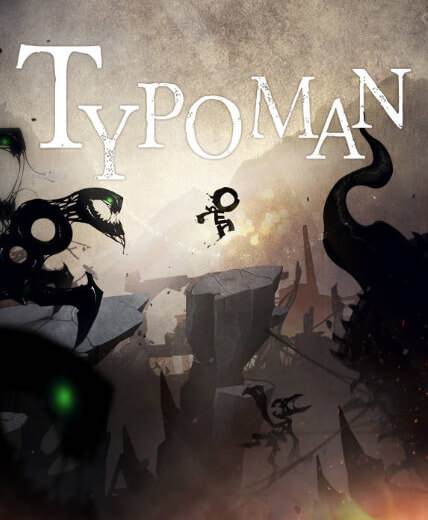 
Typoman is an independent video game developed by Brainseed Factory for Nintendo Switch, Wii U, Xbox One, PlayStation 4 and PC. The game follows a hero named HERO who crafts words to alter the environment around him.

Typoman features a number of environmental puzzles that are solved by crafting words that are relevant to the situation. For example, players can spell "up" to activate an elevator, or "open" to open a door. Situations become increasingly complicated as the game progresses, requiring the player to come up with puns to manipulate items.

The idea of Typoman was born out of a desire to experiment with typography and gameplay. Brainseed Factory founder Bilal Chbib explains that the original plan was to "have objects and monsters shaped out of letters, and nothing else." As development continued the team eventually decided to implement puzzle based gameplay using letters and words.

The game was originally a Wii U exclusive, and Nintendo showcased the game at the Nindies@Home program during E3 2015. The game launched for Wii U in 2015.

A year after release, Brainseed Factory announced an updated version of the game called Typoman: Revised would be released for PC, Xbox One and PS4. The revised version implements several design and graphical improvements. The PC version launched in 2016, with the console versions following in February 2017.

The original Wii U version of Typoman received mixed reviews from critics, with a score on review aggregator Metacritic of 57/100. Typoman: Revised for Xbox One and PlayStation 4 was better received, scoring 73/100 and 75/100 respectively.

The game was nominated for "Best Puzzle Game" at The Independent Game Developers' Association Awards 2018.