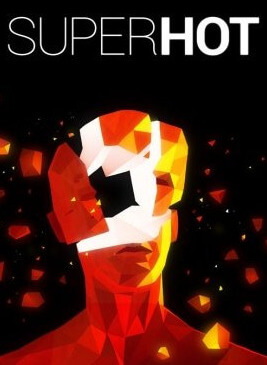 Superhot is an independent first-person shooter video game developed and published by Superhot Team. Though the game follows traditional first-person shooter gameplay mechanics, with the player attempting to take out enemy targets using guns and other weapons, time within the game progresses at normal speed only when the player moves; this creates the opportunity for the player to assess their situation in slow-motion and respond appropriately, making the gameplay similar to strategy video games. The game is presented in a minimalist art style, with enemies in red and weapons in black, in contrast to the otherwise white and grey environment.

The game originated as an entry in the 2013 7 Day FPS Challenge, which Superhot Team expanded into a browser-based demonstration that September. Widespread attention from the demonstration prompted the team to develop out the full game, using Kickstarter to secure funding to complete the title. Superhot was released for Microsoft Windows, OS X, and Linux in February 2016. Versions for the Xbox One, PlayStation 4, and Nintendo Switch were released in May 2016, July 2017, and August 2019, respectively. A rebuilt version of the game to better support virtual reality, Superhot VR, was later released for the Oculus Rift, HTC Vive, and PlayStation VR headset devices. A standalone expansion, Superhot: Mind Control Delete, which utilizes roguelike elements such as procedural generation and permadeath, became available through early access in December 2017.

The game was met with positive reception, with reviewers considering the title to be an innovative take on the first-person shooter genre.

Superhot sets the player in a minimalistic environment, taking out hostile attackers that are trying to kill them. Weapons picked up by the player have limited ammunition, requiring the player to rely on defeating enemies to get more ammo, or making melee kills. Taking a single hit from an enemy bullet kills the player, requiring them to restart the level. Though the game mechanics are typical of most shooters, time only progresses normally when the player moves or fires a gun, otherwise time is slowed; this is described in the game's tagline "Time Moves Only When You Move". This gives the player the opportunity to alter their actions as to avoid the path of bullets or to better assess their current situation.

The game originally was a three-level prototype browser game. In expanding to the full game, Superhot Team created a campaign mode across approximately thirty-one levels, estimated to be as long as Portal. The full game includes additional weapons, including explosives, melee weapons, and improvised weapons like billiard balls that can be thrown at enemies, and introduces computer opponents that have similar awareness as the player and can dodge the player's bullets. One significant change from the earlier prototype is that the player does not automatically pick up a weapon when they pass over it but must enact a specific control to do so, enabling the player to selectively choose and use weapons, or grab weapons as they fall out of an opponent's hands. The full game also enables the player to jump and as long as the jump button or key is held, the player can slow down time to plan and perform actions, enabling aerial gunplay.

In the last portion of the campaign, the player also becomes able to "hotswitch" into an enemy's body, wherein they take control over the target, with the previous body dying. The manoeuvre allows the player to escape projectiles that are unavoidable, but has a cooldown timer that prevents repeated use, and the new body also drops its weapons upon switching.

In addition to the campaign mode, the full release of Superhot includes an "endless" mode, where the player survives as long as they can against an endless stream of enemies. A "challenge" mode allows players to replay the campaign mode levels but under specific restrictions or requirements, such as completing the level within a limited amount of time or only using a specific type of weapon. The final game also includes a replay editor to allow users to prepare clips to share on social media websites.

The Superhot narrative works in several metanarrative levels: the player plays a fictionalized version of themselves sitting in front of their DOS prompt, getting a message from their friend who offers them a supposedly leaked copy of a new game called superhot.exe, claiming that the only way to access it is with a crack. Launching the game immediately thrusts the player into a series of seemingly unconnected levels via different points of view, all based around killing hostiles, after which the game glitches out and disconnects. After this crash, the player's friend sends an updated version of the .exe file, apparently a new version of the game that fixes the "glitches".

As both the player and their friend play through superhot.exe, it becomes apparent that the player's presence in the game is monitored by whoever is responsible for the game – referring to itself as a "system" – and demands they cease playing via various methods, such as ominous threats showing the player's in-game residence, and altering the player's messages to their friend to urge them to stop playing, eventually harassing the player's friend into giving up on the game and engineering a fallout with them. As the player goes through more and more levels, each apparently targeting specific locales, the system's warnings grow more ominous, telling them the player is unaware of the consequences of their actions, eventually forcing the player to walk to their own in-game house and to their in-game player character, a figure wearing VR headgear, and punch themselves into unconsciousness. Upon doing so, the "game" glitches out, and the player character wakes with a severe head injury. Afterward, the system warns the player once again to stop using Superhot, and forces the player to quit the game entirely.

Inevitably, the player will start up Superhot again, and the system concedes to the player's insistence to keep playing, fully encouraging them to play more and more. Now under the system's sway, the player begins a rampage through city streets, cutting through enemies to get closer and closer to a massive laboratory that houses the system itself. There, it guides the player into uploading itself into the core as numerous enemies attempt to stop the player. Once done, the player becomes part of the core, joining numerous other minds absorbed by the core itself into a transhuman hivemind. The core forces the player to shoot their original body/player character, finally making them one with Superhot.

Post-credits, the core/hivemind informs the player that they are to spread interest in superhot.exe by recommending it to as many people through social media and Steam reviews, specifically instructing the player to use the words "Superhot is the most innovative shooter I've played in years!", the same words the player's friend used to recommend them the game.